Color or Black-and-white Landscapes (photography, and a writing prompt)

So, which is more “alien,” color or black-and-white?


And the following is the same photo rendered in black-and-white, with some modification in contrast and brightness: 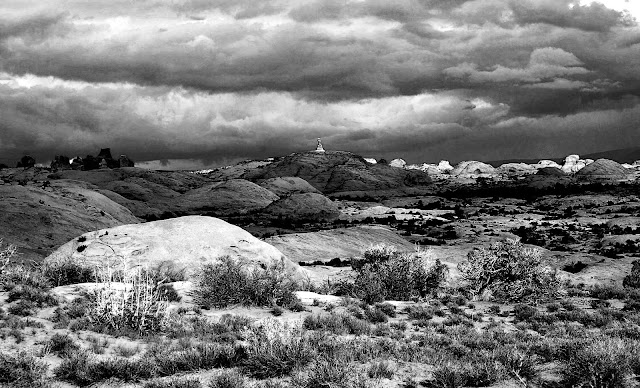 What’s the difference, in terms of how we sense each picture and in how we respond emotionally?

The variety of color in the first photo makes an extreme contrast between the stark blues of the sky and the weathered drab neutral reds, tans, and ochre-whites.  There’s contrast in the ground too, the shadowed horizon cobbled with brighter sun-touched rocks, and the dull greens and grays standing against the yellowed sands.  The blue is uniformly cold, with no trace of the warmth in the rocks and grass that come forward.  The horizontal dividing lines in the picture are thus sharp:  the lowering sky, the dark middle distance, then the contrasts of the lower section—like geological strata in layer-cakes of color, the clouds more distant than the close-up ground.

But in the second picture the similarity of the shapes stand out more.  The eye so quickly realizes the colors in the first picture that the doughy pillow-case forms of both the clouds and rocks are not as prominent.  The B&W picture is more integrated, the clouds closer, more participants in the landscape than backdrop.  The rocks in turn seem to pick up the motion of the sky, making the scene more animated, more “organic”?  And the central spicule “monument” is now less prominent, more “lost”?  Is the second less serene, more edgy?

Make these into a prompt for a writing class.  Show the first picture on a screen and say,  “Write a description of this place.”  Let them work for a while and maybe share results.  Then throw up the B&W version, and say, “Describe this one, but emphasize what’s different—details, senses, emotions, reactions.”

Or, maybe more fun, ask them to compose a story around the first picture.  Then show the next and have them write a wholly different story.

Science fiction, the “literature of ideas,” has a reputation for being “brainy,” for “thought-experiments,” for cerebral speculations and extrapolations.  Of course, since the genre is fiction, questioning on futuristic change must occur in a story with relatable characters.  SF is not essays about possible futures but tales on the effects of that future on people.  Still, to many readers, what makes SF unique is its intellectual appeal.  We read for entertainment, but we also read to become educated in the possible.
Well, okay.  All true, yes.  But real appeal is in the emotions.
In his book Brain Rules, brain scientist John Medina, discussing how to increase people’s attention, says that emotions get our notice first, and that “The brain remembers the emotional components of an experience better than any other aspect” (p. 82).  The tension we feel as we walk down an alley or through the woods at night is more remembered than an abstract discussion of the experience.  We all know this—“common sense,” right?—but Medina, with an anatomy of the brain's wiring, even shows us why (it involves the amygdala, which deals with our emotions; when aroused by an emotion, it sends dopamine into the system, a neurotransmitter which increases memory and attention [80-81]).
So what we retain most is what’s most connected with our emotions.  Maybe that’s why our first response to a book is “I like it” or “I don’t like it.”  It’s not the details of jaunting or the workings of the future we remember most from The Stars My Destination, but Gully Foyle’s tempestuous drive for revenge (the one line everyone seems to recall is, “Vorga, I kill you filthy!”), and we react less to the rational planning and methodical details of psychohistory in the Foundation trilogy than we do to the Mule’s irrational, forceful, and singular derailing and destroying of them—a shock for me when reading those books, and the moment I recall more than any other.
A popular genre that relies on “ideas” needs emotion for readers to relate to them and to remember them well.  Isn’t the cross-genre of SF and romance an attempt to tap the emotions more?  And doesn’t SF crossing with mysteries use not only the rationalist sleuthing of the mystery genre but also its sense of dark threats and hidden secrets?  And any tie with horror naturally brings in fear.  So let us celebrate this emphasis in SF.
Finally, a recollection and the reason for this post.  Long ago, when reading what are now the classics of SF and when having those childhood dreams of writing SF myself, I imagined—I hope I wasn’t alone in doing this or it’ll be embarrassing—some interviewer someday asking me what my SF would be all about, and to say it in 30 words or less (or, today, in the Tweet version).
And I always gave my response as:  “The obsessed, the pursued, and the space between.”
I liked that.  And—I see now—it was an attempt even then to get more emotion into SF.  (And maybe I had just read The Stars My Destination.)
And, you know, it still fits.  The rewarding realization after all this is that, yeah, it’s the goal that still guides what I’m doing.
Nice to know it’s still here.

Medina, John.  Brain Rules: 12 Principles for Surviving and Thriving at Work, Home, and School.
Pear Press, Kindle Edition, 2010.
Posted by Albert Wendland at 5:06 AM No comments:

The Topics for this Blog

A blog!  Just so.  And its subjects?
First, science fiction.  I’ve read it all my life and just finished and published an SF novel (The Man Who Loved Alien Landscapes, forthcoming from Dog Star Books).  It’s determined my outlook on the future, the past, and the universe itself.  I especially like space opera in the Andre Norton, Poul Anderson, Peter Hamilton, C. J. Cherryh, Jack McDevitt vein, but I’ll take SF in all its variations, near and far future, social extrapolation, cyberpunk and even steampunk.  Fantasy too, but maybe because the world-building often reminds me of the same things done in traditional SF.  And a lot of cross-overs, like SF-mysteries and SF-romance.
My attraction is not just to the science.  Though I have some actual background in science (early studies in physics and an abiding interest in astronomy and geology), my real connection is to SF’s “sense of wonder,” new sensations and the emotional response to them, the adventure in meeting, if only intellectually or descriptively, new planets and phenomena.  I’ve never lost this “gosh-wow” feeling and I hope SF never loses it either.
Related to that is the sublime, how it appears in SF writing, in SF art and graphic novels, but also in traditional art, the sense of an experience beyond expression, beyond understanding, that’s overwhelming, and thus terrifying. Vast landscapes, objects of great power, events destructive or unexplainable, and how these are shown—no, suggested—in both prose and art.
Landscape is a special part of this interest, natural settings so peculiar, so different from those we expect (and we have many such here on Earth) they seem almost alien landscapes.   I will comment on alien worlds in outer space, astronomy and planetary discoveries, but I’ll also talk of how such places are described in fiction when we don’t even know how they might appear.
Because of this interest in using sensory language to depict something that hasn’t been “sensed,” I’m working on a how-to-write book that deals with writing description, in all of its factual, sensory, emotional, and poetic means.  I’ll discuss description in popular fiction or genre fiction, and how it differs from SF to fantasy to mystery to romance to horror to historical fiction.  But special parts of the book (or another separate book) will show how to suggest the wonder and sublime of SF.
I’ll also look at visual examples of landscape, especially in art and photography.  You’ll see many photographs of landscape and its emotional or suggestive impact.  We might look at comic art also, and the graphic novel medium itself, its forms of narrative and presenting ideas, in doing what no other medium can do.
As you can see, with all these interests, a novel with the title The Man Who Loved Alien Landscape seems an obvious product of them, in its sense of emotion, of landscape, and in that slight hint of the sublime.  So I’ll also talk of inspiration for my SF novel and those that might follow, the process of writing, the managing of plot, characters, and setting.
I hope you enjoy.
Posted by Albert Wendland at 10:09 AM No comments: