Most people returning from New England in autumn think pleasant recollections of yellow-red leaves, apple pie, white church steeples against blue heavens, maple syrup, quaint covered bridges, and rolling hills of brightly colored trees.
But I think of H.P. Lovecraft.
It doesn’t matter that the sun shone for the two days I was there (in Vermont, in October at peak foliage intensity), that all the people I met were friendly, that the town where I stayed (Woodstock) was lovely and welcoming, and that the forest trails to the nearby mountain tops provided delightful and peaceful excursions.
None of that counts.  When I come home from an autumn trip, the first thing I want are the gloomy, mysterious, lurking, frightful, and threatening words of H.P. Lovecraft.  Like the start of “The Dunwich Horror” where a man takes a wrong turn in New England and—

. . . he comes upon a lonely and curious country.  The ground gets higher, and the brier-bordered stone walls press closer and closer against the ruts of the dusty, curving road.  The trees of the frequent forest belts seem too large, and the wild weeds, brambles, and grasses attain a luxuriance not often found in settled regions. . . . When a rise in the road brings the mountains in view above the deep woods, the feeling of strange uneasiness is increased.  The summits are too rounded and symmetrical to give a sense of comfort and naturalness . . .

The objects seen are not frightening in themselves—the ground, the stone walls, the curving road, the trees, the grasses, the mountains, the summits.  It’s the way they’re described, the words chosen:  “lonely and curious,” “press closer and closer,” “too large,” “wild,” “not often found,” “deep,” “strange uneasiness.”  Lovecraft is famous for taking objects that normally have standard “comfort and naturalness,” but then layering them with emotional adjectives that spawn an inescapable tension and fear.  Nothing really threatening appears, but the perception of it, the emotional reaction to it, makes the mood so uneasy. Mountain tops being “rounded and symmetrical” are harmless, but if they’re “too” rounded and symmetrical, then just that one word makes things suddenly weird.
For me, this stylistic game-playing is the great attraction to Lovecraft.  Even if such impressions are forced, a product of imposing emotional reactions onto harmless objects, the overall mood is still convincing.  His New England is not the one I encountered, but I still like to read of it—imagine it, feel it—when I get back home from it.  Keep the maple sugar!  In autumn, I want hints of cosmic terror, a lurking shadow of something not right behind the landscape—an ambiguity, a touch of vast and sinister presences “out there.”
As said in “The Colour Out of Space,” “It is not because of anything that can be seen or heard or handled, but because of something that is imagined.”
When I was a kid, my family used to go for weekends to a hunting camp in northern Pennsylvania, and my favorite time was in the fall.  Of course, there was all that color and scenery, but what struck me more was the sense of decay.  Of fleeting time, of all that you see accelerating into an unreachable past.  Change is so obvious in autumn—each day brings more leaves to the ground.  And it produces a sense of growing vulnerability:  the trees become more bare, the woods open and reveal themselves, lose their protection, lose their cover.  And since the nights grow longer, and the camp was near the top of a mountain, the night skies seemed closer, to the point where we could almost touch them—and if we could touch the stars, then they could reach down and touch us.
The bunk I slept in was on top, close to the ceiling . . . closer to the sky.
Can you feel that Lovecraft mood creeping in?
As said in “The Colour Out of Space,”  “at twilight . . . I vaguely wished some clouds would gather, for an odd timidity about the deep skyey voids above had crept into my soul.”  And:  “I hurried back before sunset to my hotel, unwilling to have the stars come out above me . . . the sinister stars.”
While I was lying in the bunk alone and listening to the wind outside in the dark, another Lovecraft quote would be appropriate:  “in the autumn of the year, when the winds from the north curse and whine, and the red-leaved trees of the swamp mutter things to one another in the small hours of the morning under the horned waning moon” (“Polaris”).
The season of fall always brings impressions of Lovecraft.  In Vermont I saw Halloween decorations, even a shish-kabob totem tree of pumpkins on top of each other.  But I felt no feelings of  ominous haunts.  I crossed and photographed a covered bridge, but the sun was glorious and no headless horseman seemed near.  I even saw a lurking full moon pass in and out of clouds and paint baleful glows on white churches, but no hidden demons emerged.  And though the woods were sometimes quite dark with un-illuminated black hemlocks, and though the skies did become overcast and make the hills seem to close in with hidden threats, any sense of menace didn’t stay long.
Still, I’ll take Lovecraft’s moods. They bring back what always made autumn so attractive and so haunting to me.  They capture what hides around the corners—even if nothing hides there at all, it’s still here in my mind.  While I download pleasant photographs of tinted leaves and nestled farms, I can’t help imposing my own imaginative excess, and realize I walked on what Lovecraft called “the wild domed hills of Vermont” (“The Whisperer in Darkness”), and that, who knows, just maybe, I unknowingly came near “Unseen things not of earth—or at least not of tri-dimensional earth—[that] rushed foetid and horrible through New England’s glens, and brooded obscenely on the mountain-tops” (“The Dunwich Horror”).
And thus that kid from long ago, in the upper bunk that was too close to the sky, draws his tightly closed eyes a bit further under the blanket, realizing he’s in the scary state of “awed listening, as if for the beating of black wings or the scratching of outside shapes and entities on the known universe’s utmost rim” (Lovecraft’s “Supernatural Horror in Literature”).
Ugh!  The delight! 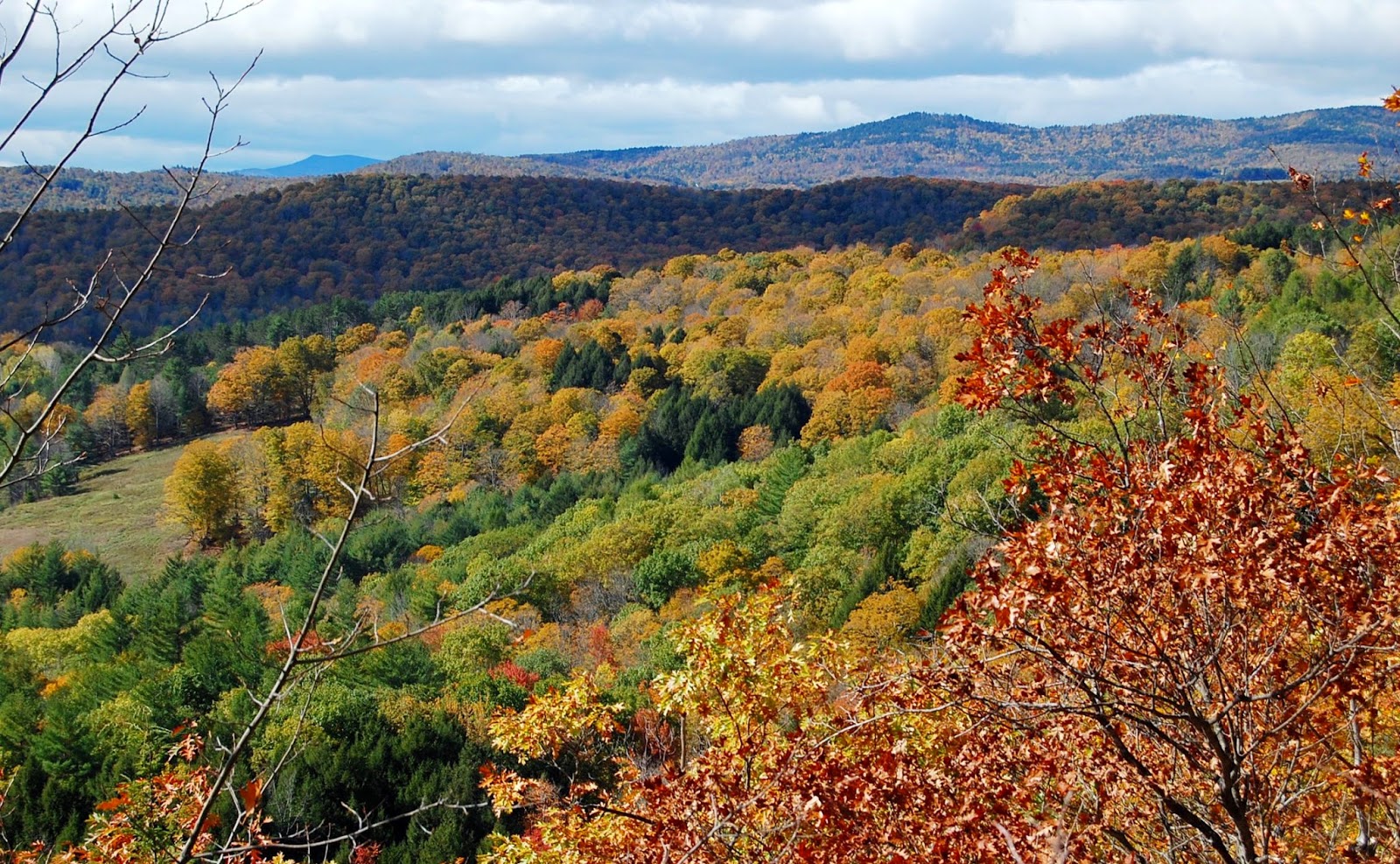 An example of "the wild domed hills of Vermont."
Posted by Albert Wendland at 7:01 AM No comments: