At one time, science fiction was referred to as “scientific romance.” This was the term applied to the stories of H. G. Wells. “Romance” meant, not love or relationships, but a narrative based mainly on adventure and entertainment, a tale of the “marvelous or uncommon incidents” (the term was first used to describe the long Medieval tales of knights and their fantastic adventures).  So a story with a scientific background or inspiration, like what happens to a traveler on a machine that can move through time, got the label “scientific romance.”  Generalizing away from romance to any story or prose narrative (serious, comic, short, or long) and you get the more familiar “science fiction.”

Then, a popular sub-genre of science fiction that started in the 1930s and 40s was “planetary romance,” in which, as Wikipedia says (bless its easily accessible heart) “the bulk of the action consists of adventures on one or more exotic alien planets, characterized by distinctive physical and cultural backgrounds.”  And a strong characteristic of this sub-genre is that such “planetside adventures” are more the focus of the story than the mode of travel to get there, or the hard science of the planet, or its technology.

The legacy examples are Edgar Rice Burroughs’ Mars and Venus novels, and Alex Raymond’s Flash Gordon (when he was on Mongo). But these works are more credibly labeled now as “sword and planet,” where cultures use the sword as the basic weapon of force, and any technology included is just there to extend the adventures.

Purer examples of “planetary romance”—adventurous, entertaining, and filled with sense of wonder—were those written by Jack Vance, Leigh Brackett, Poul Anderson (though he does include science), Andre Norton (her SF), David Lindsay (A Voyage to Arcturus), Anne McCaffrey (the Pern books), Frank Herbert (Dune), Dan Simmons (Hyperion), and selections from the old pulp magazine, Planet Stories.

And, my latest novel, In a Suspect Universe.

The story begins as obvious planetary romance:  a man’s desire for escapist adventure takes him to an exotic alien world where he encounters what he’s always wanted, a planet of wonder and mystery, and a woman he comes to love with whom he can experience it.

But he discovers that this great scenario comes at a very high price, and the story then turns into “planetary noir” (my own term, I believe), a dark and highly emotional confrontation with dangerous surprises, with secrets out of the galactic past, and a realization that even the nature of the universe is not what it seems, that it’s a “suspect” universe. The protagonist—Mykol Ranglen, and this is the second book about him—finds that the world and its people have their hidden stories and frightening enigmas.  Once having experienced his dream, he learns it can never be repeated and never returned to.  Then H. P. Lovecraft encounters Philip K. Dick.

So the best way to describe the book is “planetary romance meets planetary noir.

And I loved how these differences confronted each other, how they came together and evolved, how the varied traces of pulp fiction and classic SF coupled with the darker narratives of today, how the familiar tale of a space colony met contemporary post-human uncertainties, how the strong space heroes of the past (only male then but also female now) fared in entering today’s dangers and new physics.

It’s a heady brew of romance, adventure, tragedy, and longing.

I loved writing it. Working on it was my own personal escape.

And I hope it becomes yours too.

Posted by Albert Wendland at 6:54 PM No comments:

Cover Reveal: In a Suspect Universe

When I first saw the cover by Bradley Sharp for a book of mine about to be released (it was The Man Who Loved Alien Landscapes), I was in the hospital recovering from back surgery performed by three specialist surgeons. The surgery happened after  months of inexplicable neck pains, frightful double vision, and signs of bizarre destructive activity in my spinal column. I was feeling better—the surgery was successful—but also realizing that the recovery would be long.

And then came a sudden gift from the cloud. It was my best moment there in the hospital.

I received, by email on my iPhone, the image of the cover for my upcoming book, which was my very first novel.

I had been worried, not knowing what the cover would be like, and having recently seen several books (for a favorite author) with covers I felt were completely inappropriate (not by Brad).

But Brad’s rendition brought me not only a surge of relief but an uplift of joy. I was thrilled with it--with its suggestive accuracy, its emotional appeal, its symbolic rendition of the protagonist’s longings.

I showed it to every nurse and physician who came into my room.

I didn’t think a later reveal could match the euphoria felt on seeing the cover to my first novel for the first time (I wrote about it in an earlier blog entry), but when Bradley Sharp is the artist, a second experience is just as exciting.

See the official cover reveal from Dog Star Books here.  I reprint the cover below, but both covers can be seen in the column to the right of this entry.

I have only those two examples so far (I saw his other covers but I hadn't read the books), yet I can see in them characteristics that would make both writer and reader mighty grateful for what he can do.

First, he obviously looks into the manuscript to get ideas. When a cover is commissioned, authors receive questionnaires sent by the publisher that ask for short paragraph descriptions of the protagonist, the antagonist, the setting, and recommendations for what the cover could show, which are then sent to the artist.  Busy artists might use this material exclusively and never look at the actual manuscript at all. But Brad puts ideas into his covers that obviously come from his own examination of the manuscript--he does his homework, and it shows. The first cover included specifics about the jungle setting, its layers of growth, the “underworld” of luminescent vegetation, none of which were included in the description I sent. And the second cover has details in the misty section (see the square-rigger?) that also were not part of my questionnaire and yet do appear in the book.

Second, he can translate verbal ideas into visual images, making suggestions or even  symbols of more abstract concepts from the story.  In both novels, there’s a deep connection between the protagonist and the alien planets he visits. The spread arms of the figure in the first cover represents this idea perfectly, as does the contemplative stance of the person--the protagonist again--in the second cover. These images convey ideas unconsciously accepted by the viewer:  the first figure “loves” the landscape, and the second is wary but fascinated, sensing a connection between himself and what he’s looking at, which could be threatening.  And the way the whitish mist (with its mysterious objects) is aligned with the head of the person suggests that such a connection might be closer than he expects (which is a major plot point).

Third, the composition.  Both covers use an overall symmetry (with necessary exceptions to it), which provides a sense of stasis or order in the midst of peculiar alien phenomena. The visual balance is like a pause, a moment of poised observation of an object that causes wonder and fear—with a notion that the wonder transcends the fear.  (This kind of symmetry reminds me of the best of Stanley Kubrick, his use of balance in 2001, of course, but even The Shining, to confront obscure and frightening phenomena.)

And fourth, the detail.  I mentioned the minutiae of the jungle in the first cover but also, if you look closely, you can see a ring-shape lurking in the sky (this refers to Annulus, a habitat in space that’s a setting in the novel).  And in the second cover, the “illuminated forest” and its various colors are highlighted with a glowing mist in between the trees—depicting the shape of the boughs, but also suggestive of the strangeness of the growth.  And note how the objects in the white mist—tentacles, arches, undefined structures—are different from the more natural ones around it, the forest and the cliffs.  This contrast is  part of the story.  And the mound behind the mist, even taller than what I imagined in the novel, is appropriately overwhelming for the protagonist.  (And, yes, those oval objects are eyes.)

So, if the point of a cover artist is to convey, in one stark and immediate image, the overall mood and idea of the novel, then both these covers succeed very well. The accuracy of the feelings conveyed might not be noticed on a first viewing (the novel must be read for that), but it’s still conveyed, and it reaches the visual part of the mind if not yet the verbal. But that's exactly what it should do--hit the brain immediately with a memorable impression.

Hey, maybe I write these books just so I can see the cover Brad will produce for them.

I thank him again. And I thank Dog Star Books for choosing him in the first place. 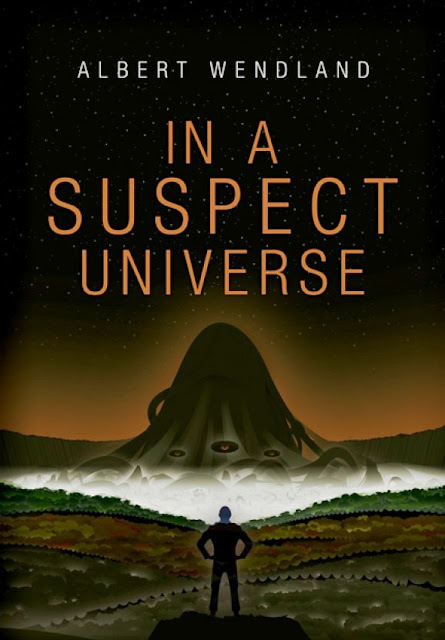 Posted by Albert Wendland at 6:17 AM No comments: