"Annulus," a Habitat in Space


A wonderful part of reading science fiction is encountering the vast imaginary constructs set in space:  the wheeled space stations, the hollowed-out asteroids with living environments inside, the Ringworlds, the “tankworlds,” the spidery structures and huge pods nested in a lace of metal trusses.
My own contribution is “Annulus,” from my novel The Man Who Loved Alien Landscapes (published by Dog Star Books).  It’s not an easy object to picture, and because I’ve had a few requests, I want to give here the visual diagram I myself put together to get an idea of the proportions and shapes involved.  First, here are the relevant descriptive passages out of the novel:

. . . Shaped like the outer edge of a shallow dish, the ring-shaped surface of the habitat rose 15 degrees from its inner rim, whose diameter was 260 kilometers with the outer rim at 380, producing an area on the upper surface almost that of Wyoming back on Earth. It was composed of a circle of accelero-gravity plates that interlocked and produced attraction fields.
. . . the red outer rim was exposed desert and the yellow ring beneath it prairie grass. The gravity plates allowed water to flow toward the center of the ring, so rivers ran into blue lakes and dark-green forests encircling the inner rim. In those lower sections, mists laced the trees and melted into the central cavity, which lay black except for a flattened bowl in the center, slightly below the ring proper and connected to it by transport tubes. The soft rim of watery fog, where the gravity faded and wisps floated in gossamer sheets, resembled a fringe of blue aurora.
. . . if you looked from a ship that flew above the ring, the habitat resembled an opal circle of concentric colors with a round gray spot in the center. And if you were an astronomical historian, you’d be reminded of the old color-saturated photographs of the Ring Nebula taken from Earth, before they found the cloud’s shape was really a doughnut surrounding a football.

The Ring Nebula comparison should give away the visual immediately, but getting the tilted angles right might be difficult from just the words.  So I drew up two “views,” one from directly above to show the entire ring, and one from the side with a cutaway.  From the side you’d see only the gray latticework that’s underneath the ring, but the cutaway shows the full-lit interior.  The side view also gives the angle of the surface itself, plus the transport tubes dropping down to the disk where the spaceport was located.  (Later in the book, the six spokes are said to follow the 15-degree slope of the ring surface and that the central shield is 20 kilometers wide.)


The drawing is crude (and there should be some blue lakes in the green area) but I hope the visual provides a helpful alternate perspective on the descriptions in the book.  Creating the habitat was a fun process of literal “world-building,” though it took a while before I settled on this particular version.  The habitat went through a series of possible shapes that included a bowl, a torus, a fat extended lens, a “sail,” and even a bottle-like black-holed surface pulled inside out (which would have been impossible to describe).
I did have a narrative requirement too:  I needed something worthy of the appreciation of my hero, a reason for him wanting to live there—I couldn’t have a “man who loved alien landscapes” shacking in some crowded claustrophobic tanktown.  It had to have room, color, a sense of openness and “landscape,” and a big inspiring aesthetic grandeur.
I hope that’s what I got in this final simple design.  The setting is used in only the first third of the novel, but in some ways I regretted leaving it for the “real” planets.
See (and hear, taste, touch, and smell) more of it in the novel itself.  The nearness of the “filmy, globulous, and much too active young star” adds drama to some of the backgrounds.
Enjoy.
Posted by Albert Wendland at 5:06 AM No comments:


At Confluence/DogCon3, July 25-27, I’m appearing on a panel dealing with “SF Art and Illustration:  Covers and Others—Find ‘em or Make Your Own?”  I love all forms of SF illustration, from covers to graphic novels to SF comic strips, and this panel title reminded me that I once dabbled with the idea of painting SF covers myself.  I never got far—my artistic abilities were not good enough.  But the interest did produce two paintings (acrylic), which I doubt could ever be used as covers, but they at least helped me to develop some skills that aimed for a specific type of SF illustration—stark, colorful, and somewhat alien.

I had painted landscapes before (in oils), works influenced by the domestic tranquility of Robert Wood, whose sentimental American landscapes filled middle-class 1950s homes, and the exuberant sublime of the 19th century British genius, J. M. W. Turner (if those two painters seem contradictory, you’re certainly right—I think that’s why my painting suffered and I eventually gave it up).  But, at the time, I wanted to do more science-fictional work.  And I especially hoped to achieve two goals:

·         To use more color.  The landscapes I had done so far struck me as rather muted, and I had noticed that SF illustration is intense with color. (This was also my move from oils to acrylics, and I wanted to take advantage of the more vibrant colors in that medium.)
·         To depict not natural objects or landscapes but huge bizarre alien artifacts, or objects so futuristic they would appear alien (and almost become landscapes themselves), constructions so huge and peculiar that they would baffle imagination and logic.

In the second goal, you can see I was influenced by the sublime (what is unexplainable, incomprehensible, beyond definition, and frightening).  Turner achieved his sublimity (in his later works) through a sense of vast undefined space filled with majestic obscurity, great swirls of weather and disaster that usually half-hid any known objects.  But I wanted my alien/futuristic “things” to be absolutely clear and yet still strange, the precision excessive, right-there-in-front-of-you and yet not helping in defining what you saw or knowing its function.  That would be the irony:  detail doesn’t help.

My first effort, which I worked on for shameless amounts of time, I called “The City in the Sun”: 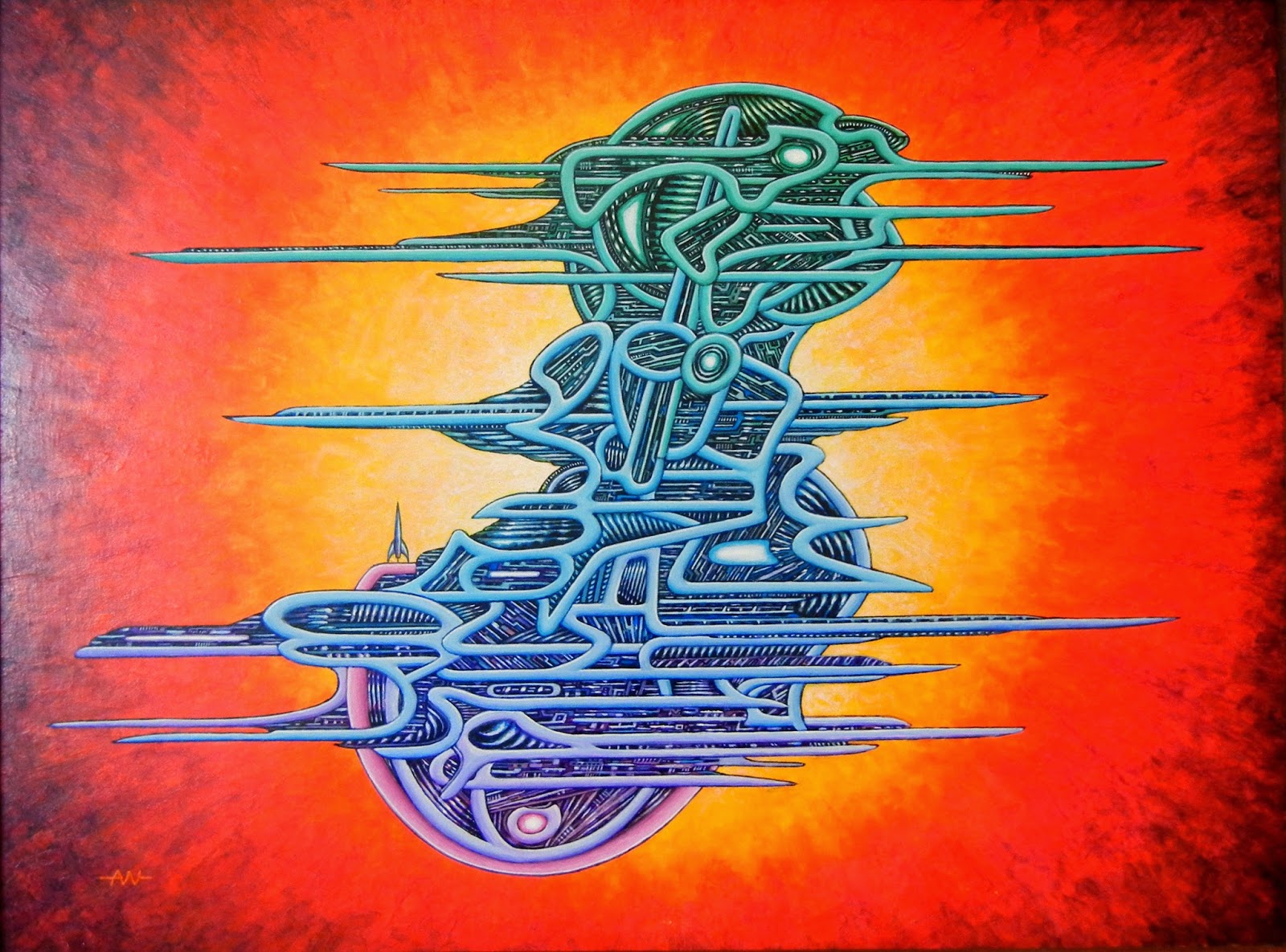 For this particular work I certainly fulfilled the first goal in using more color—indeed, too much so.  The contrast between the cool colors of the foreground and the intense heat of the background is too extreme—the foreground seems too separated from the background, the light source for its uniform tones undefined and unlikely.

But the strangeness of the object might be more successful.  The overall structure was built from a rough drawing I had done (more a scribble), but the detail within the curved and deck-like structures was influenced by the SF works of the French artist, Philippe Druillet.  His stories had appeared in the early issues of Heavy Metal, and a number of his graphic novels were published in the U.S. during the 70s-80s, such works as The Six Voyages of Lone Sloane, Delirius, Yragael, Urm, and eventually an SF rendition of Gustave Flaubert’s Salammbo (and if anyone can tell me how I can get a copy of volume III of that work, please let me know).  I wanted the same kind of hard detail to fill up the cavities of the structure.

Then I just added the title, to at least suggest some reality for the thing.  Though it might not have resulted in what I intended (I wasn’t happy with that foreground/background disparity), I was just glad to finish the painting, since it was so different from my normal quaint countrysides or steam-wrought Turneresques (any of those I’d never show in a blog).

The next attempt seemed more successful but it still was limited in satisfying objectives.  I called it “The City in the Crack of the Earth”: 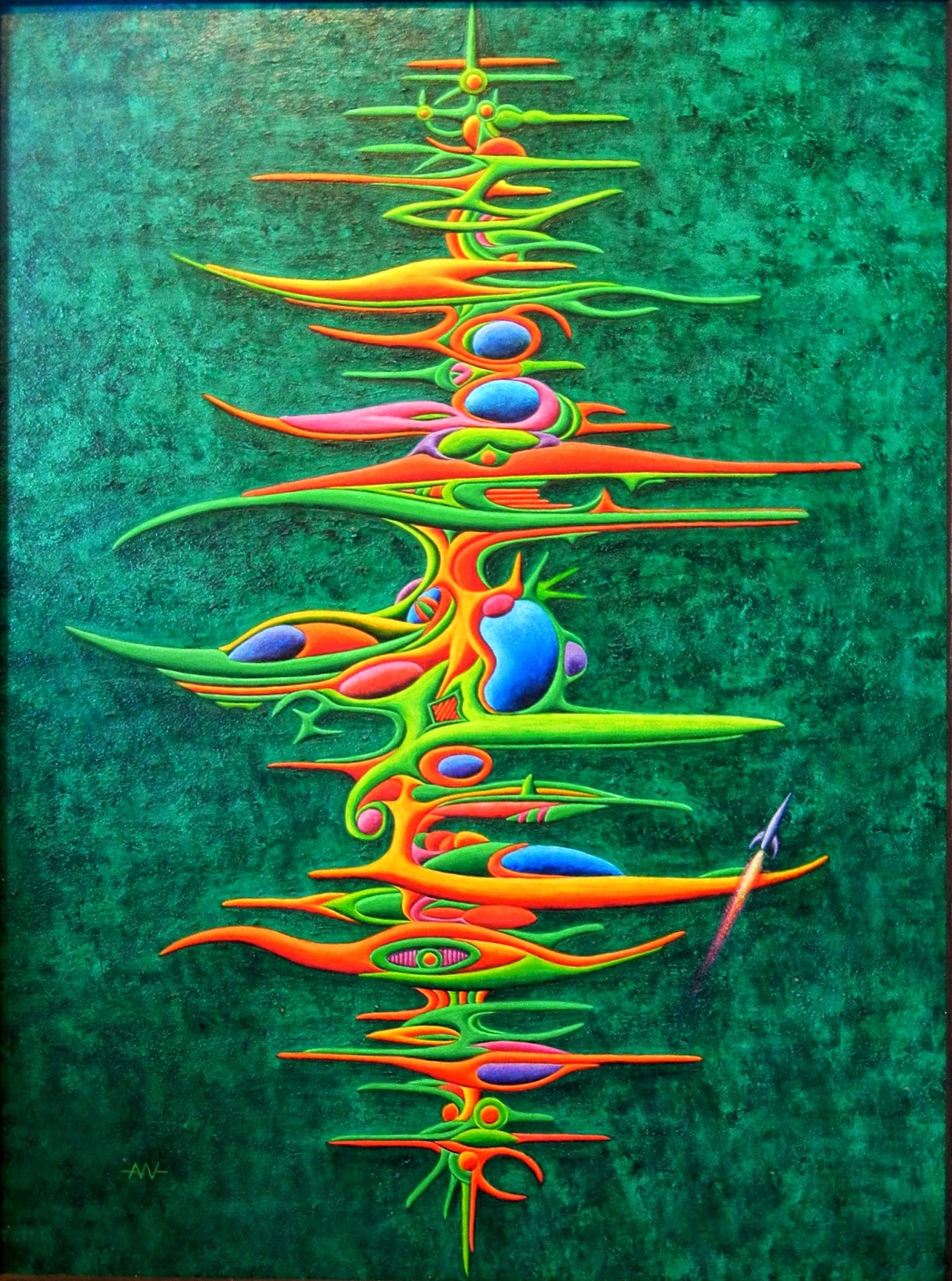 The color was still intense but without being quite so jarring.  I liked the splotchy green background (though it went through many variations and I ended up with this one out of desperation); itwas meant to resemble a plain of ground as seen from a high altitude, as if the central structure had oozed out of it and then froze into stability, like a hardened resin emerging from the earth and forming a city.  I never quite got the ground effect right but the city, if crude, seemed sufficiently “strange.”  So again there was a foreground/background problem:  the city looked like it was sitting on the background instead of emerging from it.

The two tiny spaceships in each picture, stylized rockets straight out of the 50s, were meant as a slight little touch of realism, or scale, or just proof that the paintings were alien landscapes and not some modernist attempts at surrealism or pure abstraction.  They were meant to be “real,” but just part of a realism that was “somewhere else.”

I started another “City in . . .” painting but never finished it (though, of the three, I think I would have liked it the most).  I believe I called it “The City Shattered In Space.”  The two that came before, though, took too much time to get them to where I wanted them, and they never quite got there anyway.  But maybe that third one will get finished someday.

Could they work as covers?  I doubt it.  And only in shrunken versions that could not spread across the front of the book.  Cover artists know that you need to leave room for the book title and any other blurbs or information.  The action of the painting is usually squeezed into the lower half of the frame with much bare sky to hold the title and author’s name.  So I don’t think these two would be very effective unless they conveyed scenes that definitely appeared in the story.

And at least I get to show them here.
Posted by Albert Wendland at 6:19 PM No comments: