What Makes a Good Cover for a Novel?

How do you react when you see the cover of your new novel for the first time? And what if you’re a stickler for what you feel should be good covers, exceptional covers?

All cover artists are usually fantastic at what they do, producing a stimulating and informative image. But not always. I won’t give examples, but I’ve seen a few that would cause a reader to be disappointed, even angry, at not finding in the book the mood, situation, or characters implied by the packaging.

But I’ve been very fortunate for my own books, because all my covers have been produced by the excellent Bradley Sharp. I still remember how hesitant I was when I got the email showing the cover for my first book The Man Who Loved Alien Landscapes, because I hadn’t seen Brad’s covers yet, so I was pretty terrified. My experience with art (and I’ve had some) actually made me more nervous—I felt too qualified, that I surely would nitpick it or judge it to death.

But I opened the file, and . . . I was delighted! And now, after two more books, I’m still impressed. Indeed, this third cover is maybe the best: 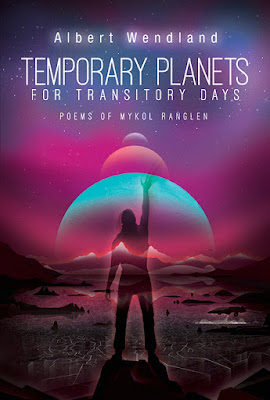 Before talking about it, let’s ask:  what’s needed in general for a cover to be “good”?

The cover by Bradley Sharp for my latest, Temporary Planets for Transitory Days, a collection of poetry “written” by the protagonist of my two earlier books, satisfies all four of these requirements.

The subject is accurate. A poem in the book called “As It Fell” is based on a scene from In a Suspect Universe (my previous novel) and Brad has used the description from the novel and not just from the poem as the landscape for the cover. The ice lake, the darkness of night, the overhead stars, are all part of the original scene in the novel and of how it’s presented in the poem.


The mood is accurate. The poems in the book express many emotions—love, wonder, admiration, desire, fear, regret, pain—but the one I believe comes across the most is “longing.” And, oh, how this picture glows with that emotion. The book is science fiction, and you can see that a strong emotion is “wonder”—with the several worlds, the star-clouds in the sky, the spaceship landing on the ice, the distant exotic peaks. But more than anything, I see longing. That figure wants that sky, the night, the alien planet.

There’s visual appeal. The design of the picture, the symmetry, the receding perspective,  pulls you in. You identify with the figure, placing you into the scene, and the figure being partially transparent allows you to see what he is seeing too, causing even more identification. But what really grabs attention is the very well-chosen green color of the first world. Its bright and rich tone contrasts well with the darker purple-pinks around it. That choice of color alone is perfect, and it sets up a gradual distancing effect with the less vividly colored worlds behind it.

And there’s a creative spark. After seeing the cover, you shouldn’t be surprised that  a poem in the book is named, “Touching the Night Sky.” The image is a visual rendition of that very title. The figure reaches upward and figuratively touches the first planet. And then  the shadows of the fingers also touch the next world.  Subtle, and yet so obvious and appropriate.  And, of course, these worlds mirror the “Temporary Planets” of the words in the title itself.


So, all in all, an outstanding picture.

If a novel conveys the experience of life, of actions, arcs, movements, and accomplishments, then the cover to a novel is a single act of magic, a crystallized “presto” image that distills the effect of the entire book.  It’s a brief but eye-catching harbinger of what’s to come, a herald, a flag.

Yeah, I liked it!
Posted by Albert Wendland at 12:31 PM No comments: