Writing, and the Hospital

A recent stay in the hospital, which took me away from this blog for a while, revealed something about writing that I never would have expected.


I went into the hospital to find the cause and hopefully the cure of severe neck pains and double-vision (both the cause and cure of which, after over a week’s worth of tests, were still being debated).  These both prevented me from doing work and, obviously, having much of a life.  I couldn’t drive (because of the double vision), I couldn’t relax, focus, or concentrate (because of the pain), and due to other related aches in my back (we believe they’re related), sitting for any great length of time was impossible, and any real physical effort (walking a lot, lifting anything) was prohibited.


During the long stretches between tests, I found time-filling activities to be difficult.  The double-vision was worse in the distance—everything looked like a psychedelic fun-house—but in the close-up range, where the doubling wasn’t too bad, I sometimes could read.  Yet a headache would soon develop, and because of that and the general discomfort, I could read in only small spurts; any sustained reading, and anything requiring close attention and thought, I couldn’t handle.  For watching television I needed an eyepatch, but I couldn’t get used to monocular vision (which makes one focus on only the center of one’s visual field, instead of being able to sense all of it as when both eyes are working).  So, after one attempt to see the Superbowl, I stopped watching television too.  I enjoyed visitors, but I felt so weary and sore that conversation was a challenge, so I frankly discouraged company—except for my wife, who knew just how much attention, and lack of attention, I needed.  I didn’t want people to see the way I looked anyway, and, honestly, laughter really did hurt.  I was trying to keep up with email, but I didn’t want to leave my laptop in my hospital room so I used just my iPhone and sometimes an iPad, but the keyboards for both of these frustrate me (my thumbs and fingertips become inches wide when I use them), and struggling with them didn’t help any headaches or pains.


So there I was, trying to get comfortable in a hospital bed which only made me more aware of my aches, looking forward to the sole pleasant sensory experience of eating a meal, or counting the hours to the loopy haze of the next pain pill, which, in the perverse way of pain medication, doesn’t so much eliminate the pain as mask it.  It’s still there, just muffled, as if stuffed under a blanket—which also causes your awareness to becomes clouded and listless.


Then, one night, after my wife left and lights were going out in the hallway, I noticed I had a tentative table of contents, on two sheets of paper, for a poetry book I’ve been working on (the sheets were brought in accidentally with some other papers I needed).  And I started rearranging the selections, playing with schemes of order, moving poems for better effect (I only had the titles, not the poems themselves).  Then, inspired, I started writing an introduction for it—the collection is supposed to be written by the main character of my SF book that will be released this summer, The Man Who Loved Alien Landscapes—a future editor writing a future introduction for poems written by a fictional future character.


And, it hooked me.  I suddenly found myself doing something I enjoyed.  I was preoccupied—I even forgot my pain.


Now, please know, I wasn’t pounding away at a computer churning out copy. (When I did have my laptop brought in for an afternoon, I found that working on it also gave me a headache and that I still couldn’t do anything sustained.)  This was hand-writing on scribbled-up lined yellow pages, and held very close to my eyes to prevent the visual doubling of words.  And it was done in pencil, which hardly could be seen in the dim indirect lighting of my room (I couldn’t reach the switch for the strong overhead).  But it was a shock to realize:  I was suddenly happy.  I was doing something.


And the point of all this?  The realization that writing has a redemptive power.


We all know some aspect of this idea, like “I have to write, to get it out of me,” or “Writing can be therapeutic.”  These are true and related to the same notion, but what struck me here was that, no matter how miserable I was (and I confess I felt that even if I did survive, my quality of life would be severely diminished), writing got my mind focused again.  With only these few paragraphs, cramped onto ragged sheets of already used paper, I felt alive, my brain charged, doing something that—shock!—seemed actually worthwhile.  It was a value, a direction, and a self-involvement that reading, watching, listening, talking, walking, eating, or taking pills, was not giving me.


This wasn’t the use of personal experience that we writers all know about and constantly take advantage of, getting writing mileage out of adverse or positive happenings, using the details of, for example, staying in a hospital, for the next time our main character has to visit a hospital.  We writers all know how direct experience can, and should, be applied—as perfect examples of showing instead of telling.


This was deeper.  After writing just those few paragraphs, and getting to enjoy creativity once more, with just a barely sharpened pencil (it was only about four inches long, with no eraser—I can’t remember how I got it) on a ragged legal pad with just a few pages left in it, made me feel I was “living” once again, still part of a larger world, functioning yet once more, “redeemed.”


I didn’t get much done.  Just two or three paragraphs.  But the next night I took them up again and played some more, elaborated on a few ideas, nothing substantial, nothing that took long enough for me to become too weary.  And though I eventually did become tired, maybe it was a bit less quickly than was normal then, and maybe I felt a bit more comfortable, as I sat there with the pad of paper as close to my face as the adjustable meal platform allowed me (it makes a terrible writing table—unsteady, flimsy, and rolling out from under you).


But it was something.  It helped.


And it showed me that writing can mean more to us in yet more surprising ways.

Believe me, I was grateful.  There in the hospital late at night, with my little toy joke of a pencil, I chugged away.  And I’m sure I had a smile on my face.

(So let me end with this somewhat triumphant, if embarrassing and humorous, photograph of me in my hospital room, standing in my newly fashioned back-brace in showing-off pose.  Believe me, I didn't feel as chipper as I might look.  I entitle the image, "Samurai Suture." You gotta love the socks.) 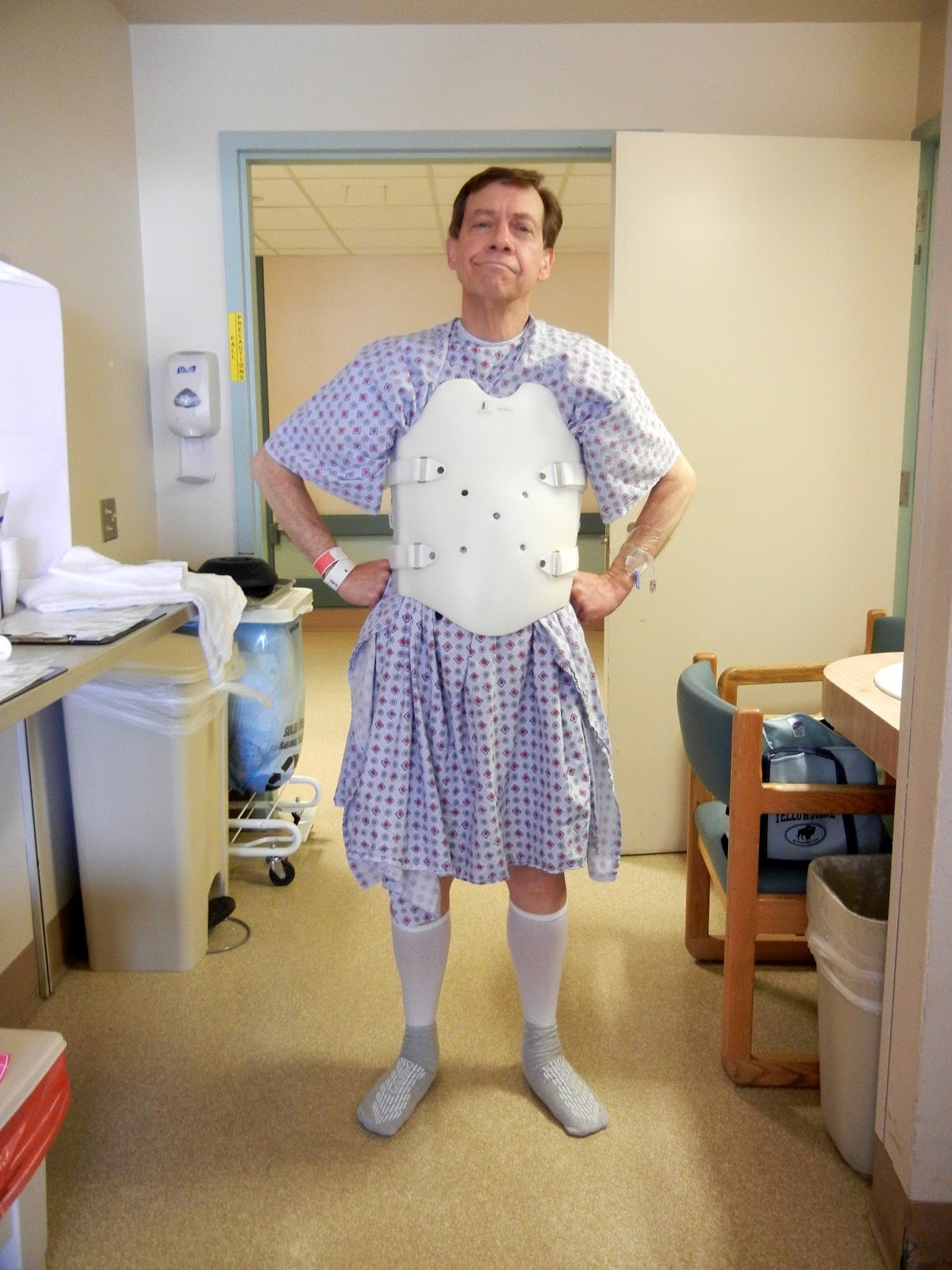 Posted by Albert Wendland at 6:03 PM