Common in the old “funny animal” comic-books was a page where a drawing of a landscape, with much line work, had objects hidden in it that the viewer was asked to find.  “Help Grandma Duck Find Her Farm Tools,”  “Save Mickey from the Hidden Animals in the Woods.”  And you’d have to search the trees, bushes, houses and barns to discover the hidden objects whose outlines were obscured in the intricate drawing.
Father Guido Sarducci of Saturday Night Live (the comedian Don Novello) made a joke of this activity when he held up a large picture of a pizza and challenged the viewers to “Find the Popes in the pizza!”  Of course, it was just a pizza with nothing hidden (at least I never saw anything) which made the task even funnier.  (If real it might have become an ad line as good as “Where’s the beef?”)
All this brings us to pictures of big rocks.  I like to take such photos for the color, the texture, and sometimes even the ghostly images that seem to lurk in them.  Interestingly, I usually don’t notice such images until after the photograph is taken and seen in 2-D, and often when changed from color to black and white.  I don’t look for them while photographing, but there on the computer screen suddenly—good gosh, would you look at that?
These images are of boulders, cliffs, crevasses, erosion, but when the imagination gets a hold of them and plays with how they appear, then who knows what might be observed in the creative interaction between our minds and all that dead material “out there.”  We impose on what we see, or, as Wordsworth said in Tintern Abbey, “half create” what we perceive.
Add good-humored titles and you’ll see what I mean.
These rocks look like stuffed sagging faces: 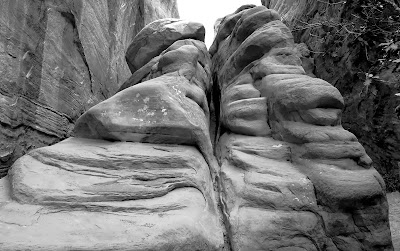 
The next picture was taken because the rock seemed somehow appealing, the composition balanced, appropriate for an unidentified “gut” feeling.  But after changing it to B&W, the title jumped out immediately. 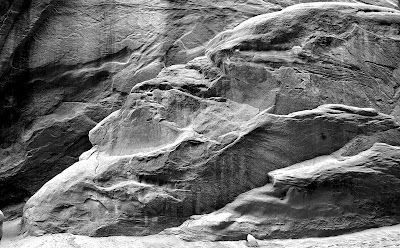 
And this hard rock cliff suggests the soft and cuddly: 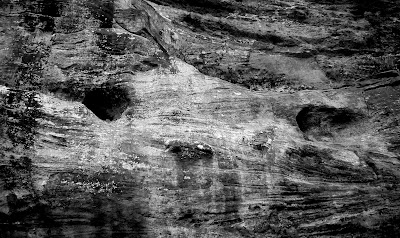 
Too bad no grass blades grew there for whiskers.
And the following was interpreted in one quick word. 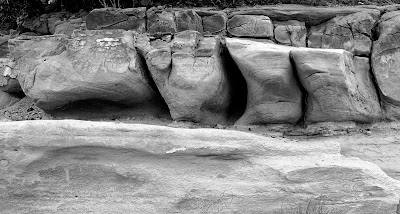 I also used “Teeth” for sharp stones in tundra, “Emaciated Fingers” for narrow mounds between ruts in badlands, and “The Beartooth” for a crag that really does have that name.
And finally, my favorite: 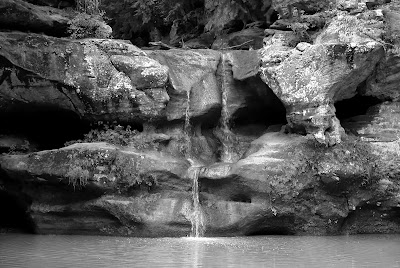 Such a grumpy old sourpuss deserves that dribble irritating his face.
We half create what we see.  We impose interpretations.  Our minds and our memories drown our surroundings, sometimes preventing any chance for objectivity.  Now that we “see” those clownish doughboys, that dog, that kitten, those feet, that squeezed cranky petulant frown, it’s hard to notice anything else.  The landscapes are changed without our even asking, and we can’t get back to a bare slate.
Do we really see, or are we lost in a funhouse of reflections and projections?
Oh, by the way, if you come across any Popes in pizzas out there, or even in rock formations, do let me know.


(The first two photos were taken in Arches National Park, UT; the third and last in Old Man’s Cave State Park, OH; and the fourth at a rest stop off Interstate 70 on the San Rafael Reef, UT.)
Posted by Albert Wendland at 9:22 AM