The "Preorder Extra"--Linking Book to Book, Prose to Poem

Even though COVID-19 has banned face-to-face book signings for a while, Dog Star Books still has a special treat for those who preorder a newly released text, and it’s a gift unique to the book itself.

My anthology of poetry, Temporary Planets for Transitory Days, will be released on June 20 with a special online reading and interview. But it’s available now for pre-order and it comes with a special giveaway treat.
The poems are supposedly written by Mykol Ranglen, the main character from my two science-fiction novels, The Man Who Loved Alien Landscapes and In a Suspect Universe (he’ll be the protagonist of at least two more books, one of which is drafted already). The poems relate to his experiences, the details of his life, thoughts on what’s happening in his 22nd century, his personal adventures, the worlds he’s visited, the people he’s loved, his “triumphs, sorrows, regrets, joys, and the sheer wonder and terror of his universe.”
But some of the incidents and people he writes about are from the two earlier novels, connected directly, or tangentially, or very obscurely, to them. So I thought it would be enlightening and entertaining to see how the creative process works and to provide an “insider’s view” of how several poems came about. Therefore, each preordered text will include an insert giving the passage from the novel that inspired a particular poem, and it will be followed with several lines from the poem itself so the poem can be found in the anthology. The inserts will look like this (the faux-snowflake shape is appropriate for the subject, by the way): 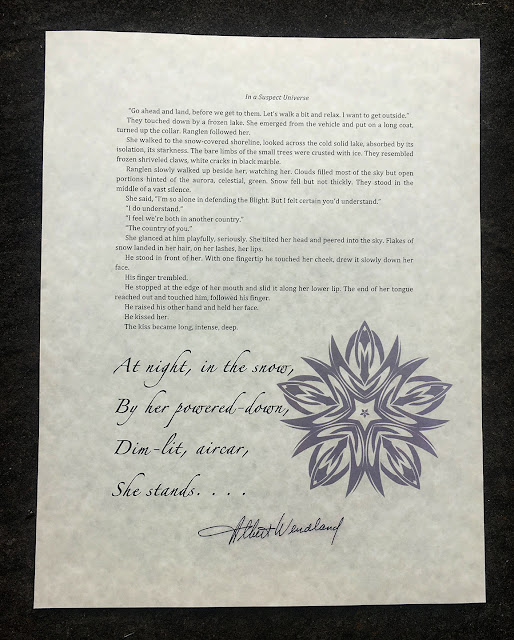 Some of the connections between the passages in the novels and the poems will be obvious (several poems are actually referred to in the two books), but others are not so straightforward, and even with the two alongside each other, the connection might not be immediately clear. So there’s also an element of mystery and puzzle-solving with several of them, and you’ll need to read the full poem to see more of the actual tie. And, though you’re given the title of the novel, you’re not given the title of the poem, so some reader-friendly exploration might be needed if you want to find it immediately.
So I hope you enjoy these “extras.” I’d say “Collect them all!” but that might be extravagant. However, I will identify here one of the poems that was used—it’s the last in the collection, and that tie is a very interesting one.

Just trying to tantalize you a bit.

Hope you like the collection.  The book , with the insert, can be preordered here.
Posted by Albert Wendland at 1:50 PM