When my novel is released next month at the “Chocolate Covered Book-Signing and Expo,” at the In Your Write Mind workshop at Seton Hill University (in the McKenna Center, June 27, 7:00 – 10:00), I hope to have a slideshow running on my iPad or laptop at the table where I’ll be selling and signing books.
The subject?  Well, obviously, “Alien Landscapes.”
They won’t be photos of Mars or the Moon, or paintings of imaginary planets.  They’ll be views of places here on Earth that have a somewhat “alien” cast to them.  I’ve traveled a lot in the western United States, especially in the National Parks and other places of “naked geology.”  And those settings are impressive for their other-worldly nature, their sense of the uncanny and the sublime, their hovering on the edge of mystery and lack of comprehension.  These places generate questions like:  Where did those colors come from?  What is that rock?  What caused those formations?  Is that place real?  How did the landscape get that way?
These are the examples I hope to show.  The pictures will have been taken by me on various U.S. trips, and not all of them will be from out west—rock formations in the Appalachian Mountains and even some eastern seacoast sunrises can look just as peculiar or unique.  I wish I had traveled the world and could show sights from the Himalayas, Antarctica, the Andes, Iceland, New Zealand, Australia, and a hundred others.  But maybe next year.

Anyway, I’d like to give a few samples here.  (Attend the book-signing and you’ll see many more.)  The first is from the area of the Blue Mesa in Petrified Forest National Park, in Arizona: 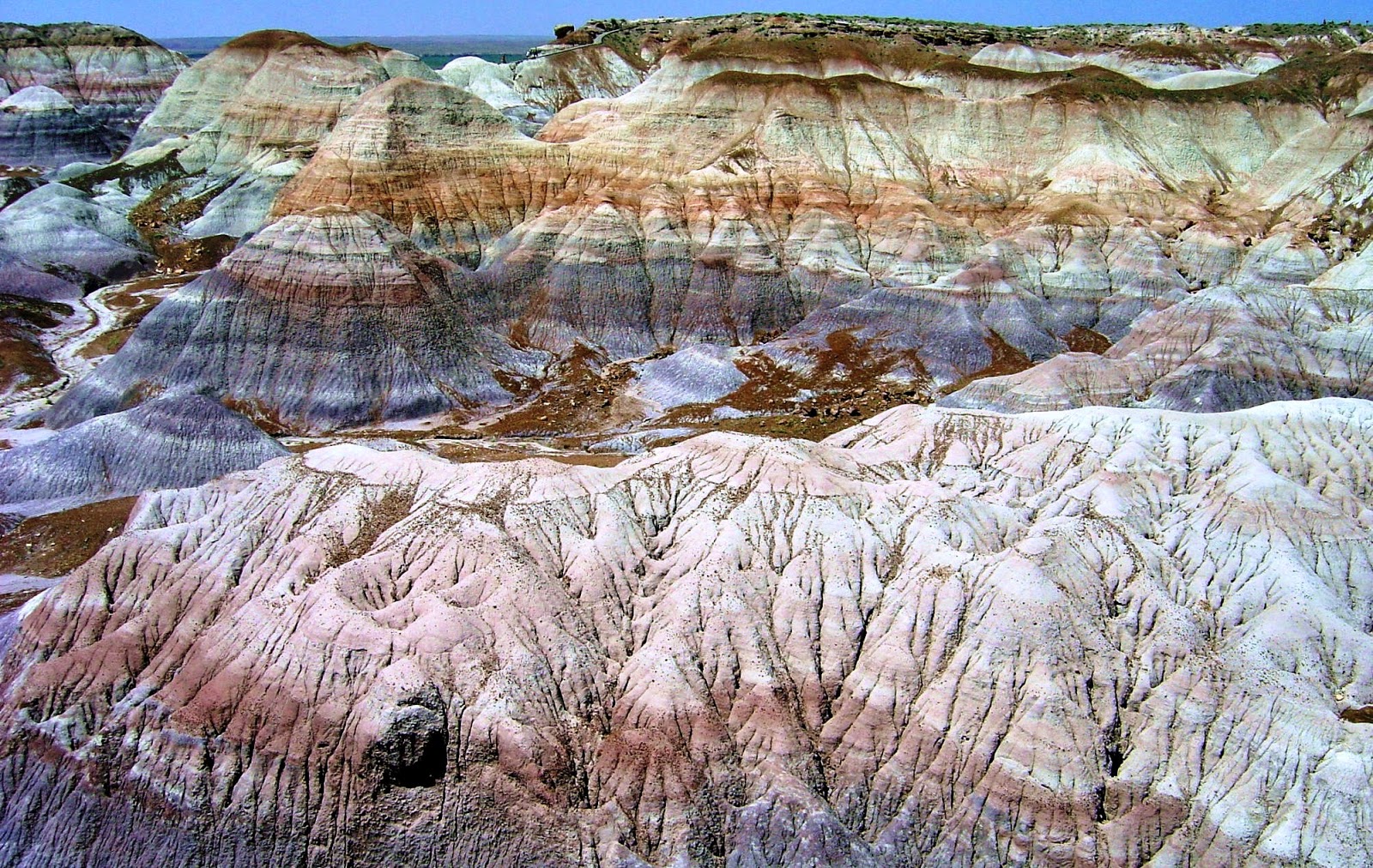 The colors there are near unbelievable.  You expect the warm yellows and reds, buffs and browns of places like Arches, Canyonlands, Bryce Canyon, and other florid locations in the Southwest, but the Blue Mesa is unique for its azures and purples.  The unexpected colors form strata in classic “badlands” formations, mounds of clayey deposits from wetlands in the past that have not congealed into solid rock, so they weather easily into these soft hillocks and humps with no jagged edges.  Geologically, they do not last “long” (“long” for geologists is millions of years).  If the climate was less arid, rains would wash them away more quickly than what’s currently happening—which is still pretty slow; you won’t notice much of a change in your lifetime.  Rain, when it comes, creates the grooves seen lining the slopes.  But the area is so stark, so devoid of life (though it does exist), the colors so subtle (the delicate pinks and violets and powder blues), the mood a bit intimidating and scary (you don’t want to get lost in all those gulleys and hidden passages), and yet at the same time touched with beauty (the small brown stones lying at the bottom of the dry washes are mostly petrified wood, which can blaze with gemstone tints), that it qualifies as awe-inspiring and other-worldly.  When the mounds are first seen, one’s comprehension and recognition are briefly challenged, brought to a halt before the view is fully assimilated.

The West has many examples of such bare-rock and austere vistas, but you can find strangeness in the East too, especially if you tweak the visual “alienness” just a little.  The following picture is of a section of Jockey’s Ridge, an enormous sand dune (the largest east of the Mississippi) on Cape Hatteras, North Carolina:

This photograph was taken early in the day, when the light was still low.  The colors are genuine (as they are in all these photos), and the only full-picture adjustment was to increase the contrast, which is standard procedure for most digital pictures that notoriously lack contrast when you first download them.  But I was surprised to see what happened when the normal contrast-increase was applied.  The sky took on a dark deepened sense of mystery, and the sand came alive with an inner radiation glow.  (A black-and-white version of this photo I’ve named “Radiated Dune.”)  The reflected light seemed almost painful and suggested the radioactivity connotation.  The large “footprints” to the right and the far poles on the horizon only seem to add a feeling of ambiguity. Finally, I loved the straight-edge distinction between light sand and dark sky along the slope to the right of center.  Eerie, indeed.

This last example is from the Hocking Hills region of Ohio, showing a rock wall in Cantwell Cliffs state park: 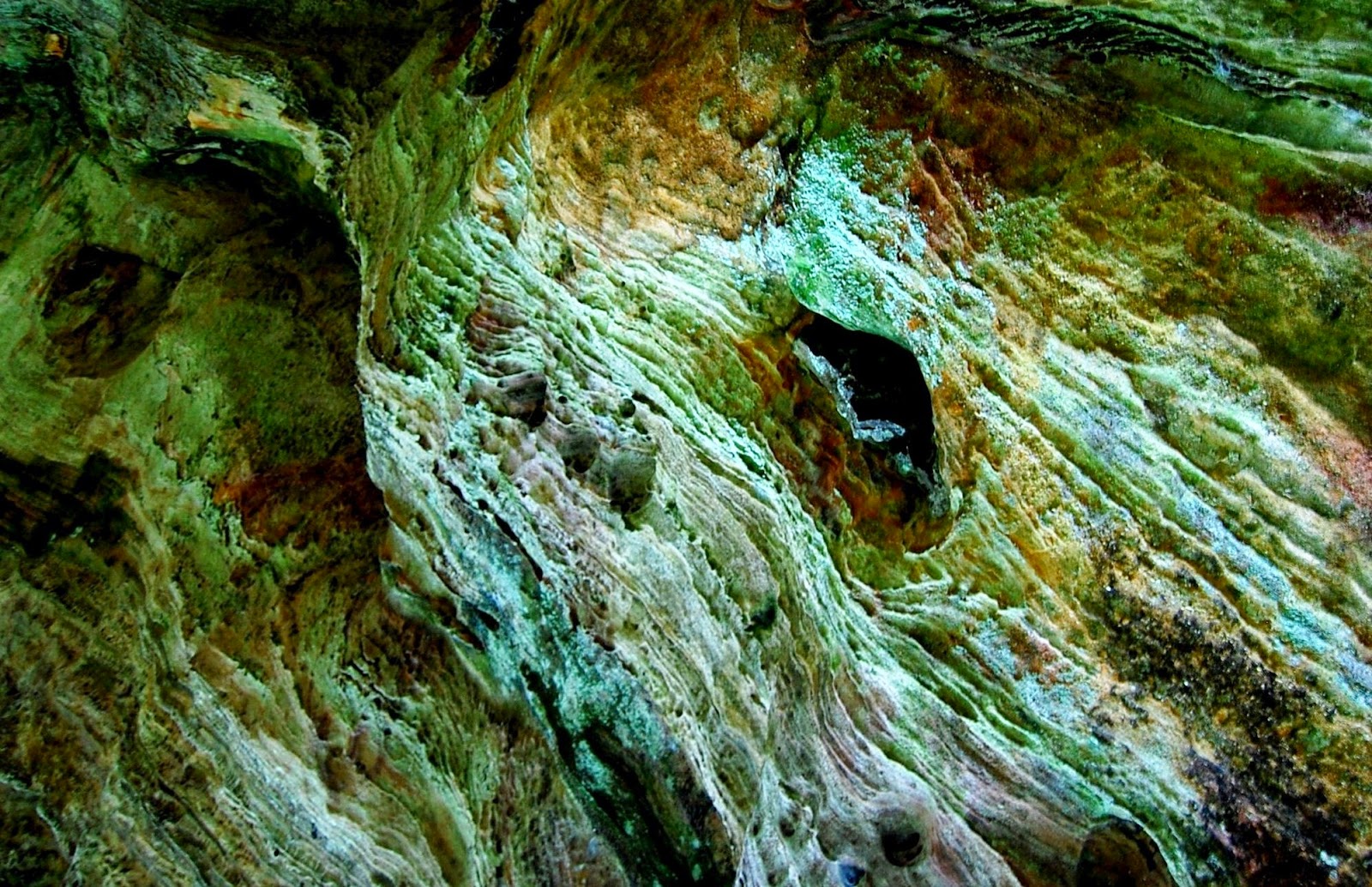 The Hocking Hills area has a number of exposed cliffs that have formed “rock cities” and large hollows. Anyone familiar with the Bone graphic novels by Jeff Smith might recognize the area as the inspiration for the landscape in his story (an “Old Man’s Cave” can be found in both the state park with that name and in the Bone narratives).  The sandstone of the area is mostly gray but often tinted with the orange, red, and pink of iron oxide.  What adds to the layers of colors, though, are the paint-like coatings of lichen, a hearty fungus-algae combination, that stains the rock in washes of pale green, turquoise, soft ochre, and even a thin violet at times.  Thicker layers of moss add a rich yellow-green or darker green.  Besides the increased contrast, one particular trick with this photo was used:  it’s printed upside-down.  It looks just as peculiar reversed, but I found the resulting resemblance to “Swamp Thing’s” face just too attractive.  The gap in the cliff just right of center resembled an eye, and the green ridge on the left the creature’s snout.  Say it’s just a result of a graphic-novel background, but the associations, and the unexpected softened tints in the hard rock, made for a peculiarity that was hard to resist.
As said, many more examples of such “alien landscapes” will be on display at the book-signing.  (Also, of course, the novel will be available.)  Seven o’clock, June 28, 7:00-10:00, McKenna Center, Seton Hill University.  I’d love to hear reactions about both the novel and the pictures.  Hope to see you there.
Posted by Albert Wendland at 4:00 AM