The End of Fables


Woe and alas! The long-running graphic-novel series, Fables, is coming to an end.

Why was it so good?

Its art was clean, direct, umembellished, simple yet elegant, with just the right touch of quirky unreality. Mark Buckingham at the helm (inked by Steve Leiloha and Andrew Pepoy) was great at depicting basic realism with a twist of fantasy. And a number of guest artists were equally impressive (like P. Craig Russell, Inaki Miranda, Michael Allred, Gene Ha).

Its covers were fabulous, each an accomplished individual painting by James Jean or Joao Ruas. Jeans had such an impressive run that his covers were collected into a hardbound text. And Ruas replaced him with a similar evocative and haunting style. They both had a tragic, humorous, and aesthetic vision that was unique.

But its writing . . . oh, the writing. Bill Willingham carried the project through 150 issues since 2002 (issue #150 comes out in June, and that will be the last). He did not rely on the often strained, over-the-top, gaudy dialogue of many graphic stories, or high-powered fist-fests amid skyscrapers or invasion fleets in the stratosphere. His dialogue was snappy, original, eloquent, his plot-twists came with elaborate plays on reader expectations, and instead of dealing with larger-than-realism superbeings, he presented simple identifiable human personalities—even when those characters were fairy tales. Their longings, problems, contradictions, heart-aches, loves and losses, pulled in the reader so effectively that once you got familiar with them, you never wanted to leave. Like watching a great ensemble cast on a long-running realistic TV show, you lived their lives right along with them. Their fairy-tale nature hardly mattered—you knew them as people, and you knew them quite well.

(Warning: spoilers ahead if you haven’t read the books. But I’ll refer to events in only the first three-fourths of the series, nothing that’s recent. I started re-reading all the collected volumes two months ago but that’s only how far I’ve reached. And I won’t be too revealing even in what I do say.)

The fundamental idea for the series was charming. Fairy-tale figures, all well-known from storybooks and legends and calling themselves “Fables,” live in hiding in a corner of Greenwich Village in N.Y.C. They disguise themselves as the “Mundies,” the natural human beings who surround them, because they had to leave their own Homelands (a place very similar to the background setting of most fairy-tales, rustic and Medieval) in a parallel world which was taken over by the Adversary, who’s determined to track them down and destroy them.

So, though they do fight back, they are in constant danger, and King Cole, the mayor of “Fabletown,” even says at one point that their only real strategy is retreat, or running and hiding, and they have to do a lot of that in the series, though they do make courageous and very well-planned stands and attacks (indeed, they take the battle to the Adversary before he brings it to them). The practical ingenuity of how they survive is one of the attractions of the series. They use every means they have: Sleeping Beauty causing people to fall into coma, the “high ground” surveillance from Cloud Kingdoms reached only by towering Beanstalks, the Beast’s transformation into a powerful fighter (even though he’s become a bit cowed from Beauty’s nagging), Bluebeard’s greed, Prince Charming’s physical prowess, even Cinderella’s eye for fashion. And they’re very thoughtful in how they face their constant dangers—rational, calm, methodical, and creative. Even Hope herself says that “hope is not a strategy” and must be backed up with real plans. Though Pinocchio at one point tries to put together a team of superheroes, it’s more a joke than serious (the witch Ozma finds her super-costume childish, but she does like the short skirt and boots). They do what they can, and that’s always the point: when the situation requires it, they manage to find the necessary strength inside themselves to face their troubles.

This brought a realism to the story that contrasted delightfully with the fairy-tale ambience (Snow White is a no-nonsense deputy mayor, and the Big Bad Wolf—or “Bigby”—chain smokes to take away the smell of too-near edible flesh). Two of my favorite issues are parts 2 and 4 of the collected volume, Sons of Empire, where, first, the Adversary gives gruesome detail about how he’ll invade Earth with four devastating legendary plagues: pestilence, fire, winter, and famine. Based on the detailed scenario, you feel that humanity has no chance against such powerful magic. But then his advisors, more realistic, describe the likely response: that the Fables would form an alliance with the Mundies and attack right back with modern weapons. This scenario shows wizards killed by long-range sniper fire, fire-breathing dragons destroyed by fighter jets, and spell-protected imperial fortresses exploding beneath aerial bombardment. The ironic contrast is quite impressive. The Adversary decides more planning is needed.

A recurring notion that Willingham favored was showing how anybody can become heroic—from the simple janitor Flycatcher who becomes a king, to the servant monkey Bufkin who defeats the vicious Baba Yaga (even when too naturally weak to lift the killing sword). The theme of redemption is strong throughout the series, the belief that people who are broken, fragile, or compromised can still find the strength to save themselves and others. Rose Red rises from her self-indulgent depression to resume her duties as leader of the Animal Farm (and more). Even Prince Charming, the womanizing cad, becomes a capable and respected military commander. None of these start out as heroes but, when they’re needed, they become heroic.

And the poignancy! Some of the Fables do die, and not like they do in Game of Thrones, to shock the audience and keep viewers on edge, but to demonstrate the need of self-sacrifice. You remember their loss with dignified respect (I won’t give the names of those who go, but each one leaves a pall of sorrow). Yet then these tragedies are countered by other upbeat and pleasant moments. I confess the event that hooked me completely was the reluctant romance between Snow White and Bigby (reformed from being a “bad” wolf). When volume 3 of the collected issues (Storybook Love) brought them together, I was doomed to read everything from there on.

And now it’s all ending! Like Prospero burying his book of magic—or Neil Gaiman’s Sandman burying his.

We do get close to these long-lasting graphic novels, don’t we?

Ah well, I guess I can always reread the entire 22 collected volumes. I’m doing it now. Like I did for Powers, Hellboy, Sandman, The League of Extraordinary Gentlemen, and especially Planetary. 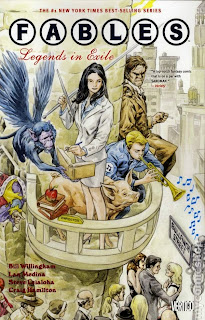 Posted by Albert Wendland at 5:45 PM