More on Fables: Closer to the End.

When I wrote my last blog on Fables I had yet to reread Cubs In Toyland and Snow White (volumes 18 and 19) and I had not read Camelot or Happily Ever After at all (20 and 21). Having now completed those, and still reeling from the experience, I’m compelled to write more, prior to the 150-page finale in July. ALERT: major doubleplus-ungood spoilers ahead. If you haven’t read the volumes mentioned don’t dare read further.

The comments in the previous blog now seem pale in gauging the impact of the series, since it’s reached a higher level of seriousness and intricacy. Cubs In Toyland was disturbing and almost painful to read, with Theresa’s fall into near bestiality, and then Darion’s suicide in order to replay the Fisher King scenario, the blood sacrifice to cleanse and restore the land. (The death of a child is bad enough, but to be self-impaled with a cue stick is a drastic way to satisfy a myth.) The volume ends with Theresa’s return home—she’s aged now, having lost both innocence and her childhood—to ask that ominous question, “Where’s Dad?” (A question vividly answered in Snow White.) So the emotion in this volume was strong, the cost of sacrifice unbearably large, and the two-sidedness of “toys,” that can cause either fun—or death—will haunt any memories of play.

The theme of redemption mentioned in the previous blog is even more strongly portrayed here, especially in Camelot, but it’s also more complex and ambiguous. The toys in Toyland (a place also called “Madland”) are redeemed, providing a host of second chances, but one has to wonder whether the price was too extreme (the lives of two children, one physically, one experientially). Theresa, so far, never seems to smile and always wears a cloak, as if draped in sorrow, or shame.

Rose Red, the designated agent of Hope, states openly the theme of salvation—“I am the paladin of second chances”—and she rebuilds the Round Table and gathers knights for it, many of whom need a second chance (like Brump and Lancelot), and who supposedly will provide such chances to others. Also, the apparent death of Bigby seems, when it happens, to have an “out,” since Ozma and the 13th floor witches say immediately that a spell powerful enough can put him back together. But the restoration gets complicated when he’s then used as a tool of destruction—possibly even the death of his family. And Rose’s idealism creates a big disagreement with her sister Snow, when Rose decides to give Brandish, Bigby’s murderer, a choice of redemption. Snow utterly disagrees, and the bond between the sisters is broken.

Every writer knows that “only trouble is interesting” and that the soul of any story is conflict. But a good story-teller has to be careful that the heroes and villains are not clichés, not overly good or overly “bad.” The point of a conflict is to make it realistic, where no one does anything out of simplistic “villainy,” where everyone has reasons, which even the villain feels are worthwhile, or “good.” The conflict that arises in Camelot between the sisters is near perfect: they both believe they’re doing the best thing. Rose insists this is her big chance to save herself, that for once she really is being responsible and that, finally, she can be trusted—that controlling and saving Brandish is almost her duty. But Snow White is protecting her children, and she’s heard Brandish swear to kill them—and the reader has seen that he has no heart, literally. With her family endangered, Snow can allow no chance for Rose to do wrong. “I’m Snow goddamned White,” and if Rose chooses Brandish over Snow, then the relationship is sundered forever.

So, whither this moral conundrum? Do the good thing according to Rose, or the right thing according to Snow? Or should those adjectives be reversed? Willingham has raised this moral razor-blade before (when the goblin Brump ate the talking squirrel in the volume Witches, with the argument that it’s “just his nature”), but this one, being laced with such high stakes and filial bitterness, makes the conflict realistically—and humanistically—complex.

And then there’s the theme of fate, or the fated stories of fairy tales taking over the living characters of Fabletown. The story of Camelot comes predetermined with betrayal and murder, to the point where the characters start seeing themselves in the various roles: Rose Red as King Arthur, the restored Sir Lancelot as Guenever, Morgana as Merlin (interesting twists there, since both Lancelot and Morgana were part of the original story), and Snow White as Mordred. Also, the old tale of the daughters competing against each other for the tontine inheritance is shown to rule the lives of the two sisters—as said in Happily Ever After, they are cursed to fight each other, doomed to have one be both survivor and murderer of the other.

For all my admiration of the series (and I think it’s been profoundly interesting) I’m concerned at how these old stories and fates seem to be taking over the ending. Before, the characters were made fascinating because they were seen as roles that also became human, fairy-tale figures portrayed with the complexity of humanity. The ongoing conflicts between Snow White and Rose Red had all the believability of sibling rivalry, culminating in the hopeless stand-off of the Brandish question, with both of them fighting for what they believe in most. But now the conflict seems artificially heightened by the spell-cast curse that’s on them. Instead of the roles becoming real people, the people seem to be taken over by the roles.

So I hope that the humanity of the series doesn’t get lost beneath the Ragnorak-like apocalyptic scenario that’s hinted as upcoming. (Or is this just a big red herring?) I want human personalities walking away at the end, not fairy tale clichés. For example, I hope someone has a few words to say about the death of Beast (and even, for that matter, of Ozma). Boy Blue’s passing was made poignant by how everyone reacted, but no one’s said a word so far about the death of a character who had a large part in the story, which makes the death feel a bit insubstantial, unreal. And I hope Rose Red will respond to the classic tragedy she’s brought about—the man she allowed to go free has just killed Lancelot, her recent lover.

But I believe in this series. I have faith—or big golden Hope—that Willingham will pull all this off and leave us satisfied. It might not be your fairy-tale ending (after all, that’s the whole point of the series, fables made real—and the volume entitled Happily Ever After has certainly been dark and ominous). But I’m sure that everything said here will be rendered short-sighted by that upcoming final volume.

Indeed, I look forward to it. 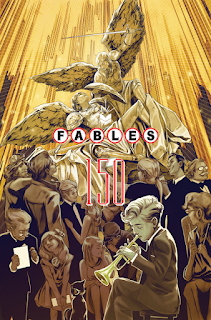 Posted by Albert Wendland at 6:05 AM