I had a blast collecting photos for my running slide-show of “alien landscapes” (see my earlier post for May 5), created to accompany the book-signing on June 27.  The McKenna Center at Seton Hill University will be filled with authors selling and signing their works, and I hope to have a slide-show running on my iPad at my table to promote the feelings of my own book, The Man Who Loved Alien Landscapes.  (I’d secretly love a big HD screen to be set up behind me, but that might be overdoing it.)
Over a thousand pictures are in the slideshow, so I’m certainly not giving anything away by sharing some here.  I showed three in the May 5 post and here are four more. All of these are terrestrial scenes—nothing interplanetary or interstellar (how I wish!).  But the point is the mood that many of the photos convey, the sense of strangeness, the “pause of reason” (as Samuel Johnson defined “sense of wonder”), the unfamiliarity, the delay before one can orient one’s perception, and the occasional vague hint of the sublime.
This first one is from Badlands National Park in South Dakota.  My wife and I were driving through, late in the day when the sun was low, and I suddenly yelled out, “Stop here, stop here!”  Carol, used to me doing this, pulled over and I quickly jumped out and soon was running all over the mounds for views and angles of the incredibly colorful and well-lit views.  The formations are clayey mud deposits that are easily weathered by rain—which seldom comes to this dry realm, but when it does it has a strong corrosive effect since there’s little growth to hold back erosion.  Most of the colors of the mounds are gray (bentonite is the predominant material), but bands of red and, in the lower levels of the park, yellows appear from traces of iron oxide—and the lowering sun added to the heat and mellowness of the scene.

This next views are from Yellowstone National Park, and I can’t imagine all the geysers, hot springs, and mud pots making a more “alien” impression.  The various geyser basins make up only small regions in a park dominated by more expectable pine forests, open fields, and mountains (and one utterly magnificent canyon), but walking through the geyser areas makes you feel you’re on another planet, negotiating a crust that is boiling beneath you, that breaks out in peaceful or not-so-peaceful cauldrons of hot activity, right before your eyes or right beside you. You can feel the subterranean steam and hot spray.  And some of the pools are so pristine and blue (and hot) that I started calling them, “the eyes of the Earth.”  You can see what I mean in just these two pictures:


Last is a cliff in the Grand Canyon.  This is a view from Moran Point on the South Rim.  I could have used many stunning vistas of the entire canyon itself, but I found this one scene so appealing because, even in the stark white-out of mid-day light, the colors of the strata were still glorious.  They were distant and thus paled, so I did increase the contrast to bring out the tones (done to nearly every digital picture), but the colors are accurate--and altogether stunning.  The Navajos call parts of their Arizona realm “the land of the sleeping rainbow,” and you can find thousands of visual examples for that line. As in this image here.
I hope you enjoy. 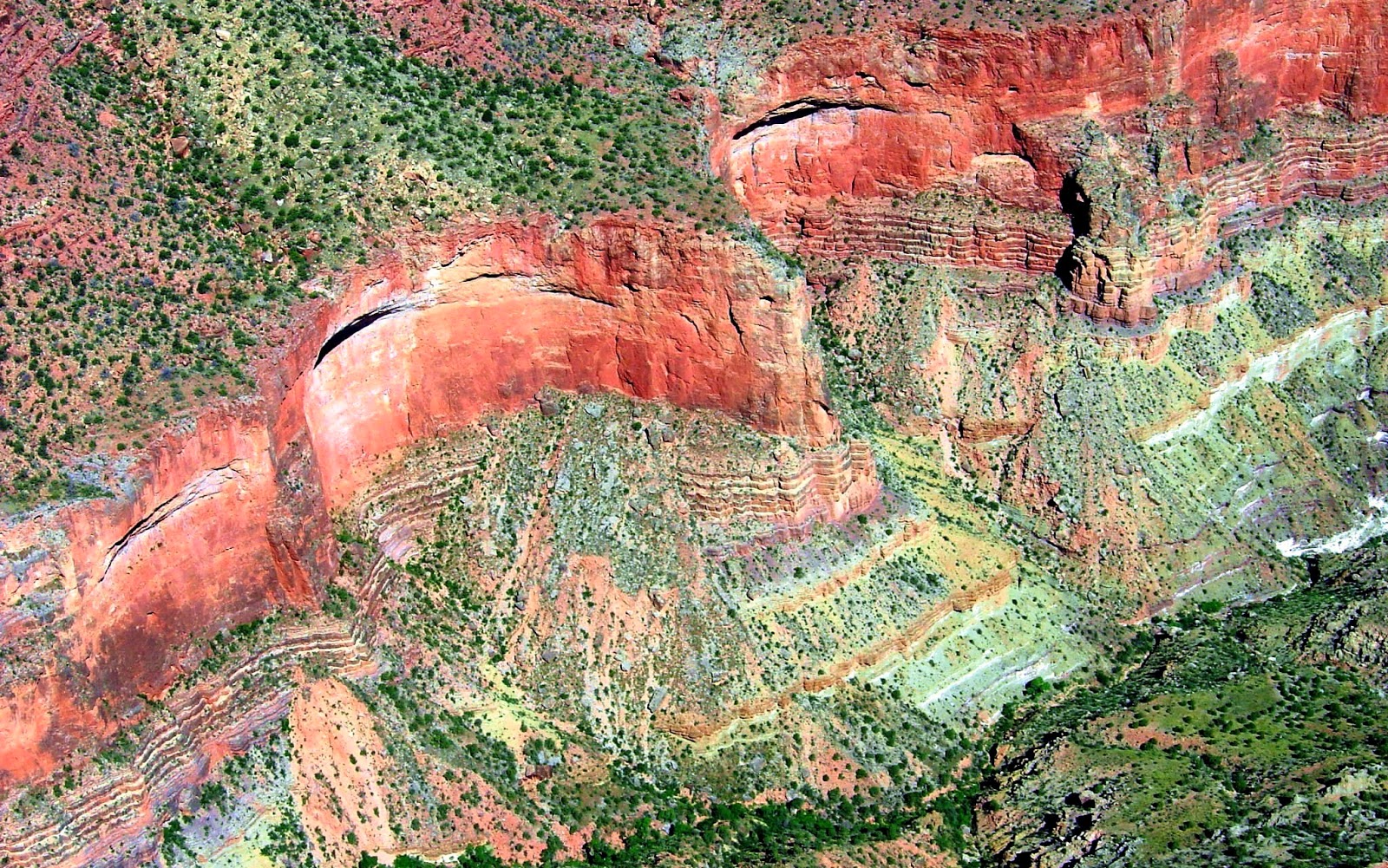 And since I found so many possibilities for inclusion while doing this, the next post (which I’ll start writing in minutes) will be on three more such pictures.  See you there.
Posted by Albert Wendland at 4:30 PM