Continuing right along from the previous blog, let me bring up three more pictures (I cheated the last time and included four) from my “Alien Landscapes” file.  All images on Earth, of course, but, hey, they do inspire a sense of the otherly.
This first particular photograph was done with a telephoto lens, and luckily the sun was bright enough that a tripod wasn’t needed (which I didn’t have with me anyhow).  I saw the vista from a car window in Badlands National Park in South Dakota, and insisted that we pull aside and park on the road.  Then I ran out to photograph as many shots as I could.  (And I must have gathered attention from other cars passing by for soon a bunch of them were parked behind us—in a rather dangerous stretch of road.  But no one stayed as long as we did.)


Here’s one from along Interstate-70 in Utah, where it crosses the San Rafael Reef (an ancient and wide structure of exposed sedimentary strata).  I love photographs of such hidden areas that seem to open up into vast underground chambers, holes that suggest caves that suggest whole buried cities, hidden depths in the cavities of the earth.  I believe the rock formation is Navajo sandstone, which has that lovely pale ocher tint and which weathers into such smooth and mysterious hollows.  (Unfortunately, these rocks were at a rest-stop and not contained in a national park, so vandalism—in the shape of graffiti and carved initials in the stone—had defaced a number of the most attractive sections.) 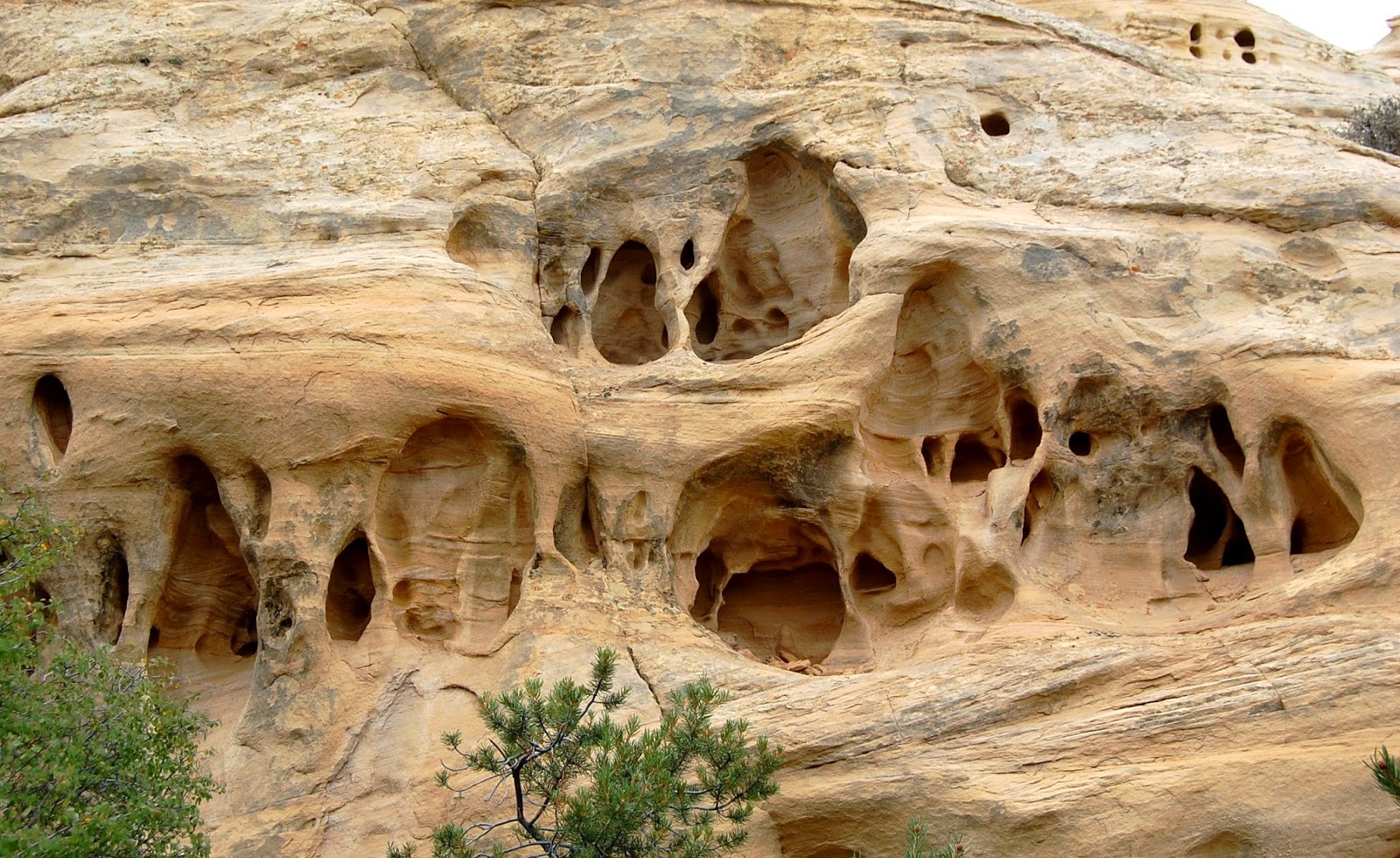 I mentioned in the last post the spectacular Canyon of Yellowstone National Park.  And it is spectacular, though its most alien characteristic is not its waterfall or black-green river at the bottom of the canyon, but the unbelievable colors in its steep walls.  The rock is rhyolite, a volcanic mineral that is generally—in this case—yellow-white (which provided the name of the park).  But in the cavern walls so many other minerals intrude, and the rhyolite has been changed by both heat from volcanism and weathering effects, that the colors become more varied—in the stunned words of Rudyard Kipling when he visited the park in 1889:  “crimson, emerald, cobalt, ocher, amber, honey splashed with port-wine, snow-white, vermilion, lemon, and silver-grey, in wide washes.”  I’d need more pictures to get in all those colors but here’s a good start. 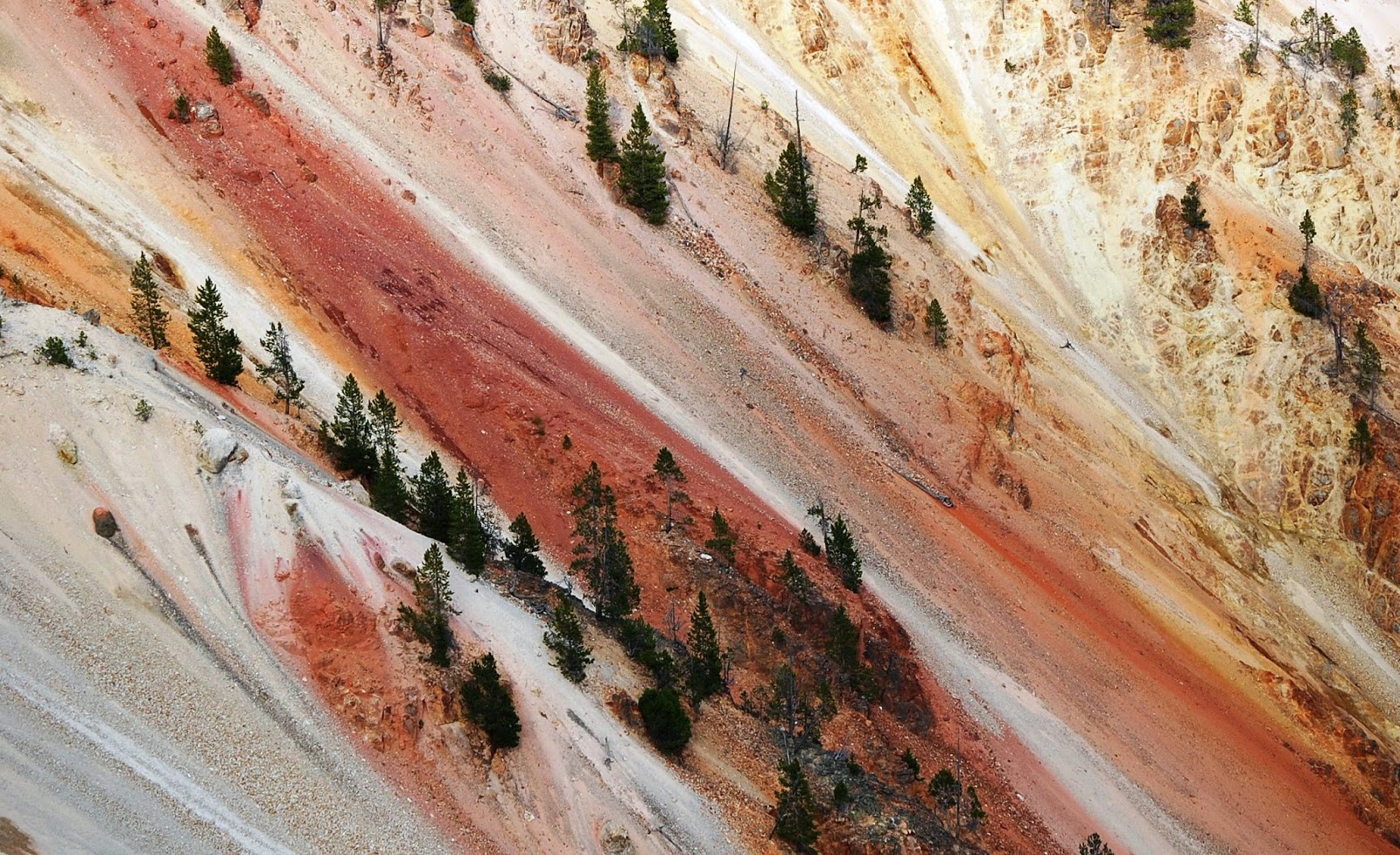 And last (I’ll cheat again and add an extra), here’s a place that really surprised me.  I knew of Delicate Arch in Arches National Park.  We had walked to it along a demanding uphill trail that was very popular.  But I also knew of another easier trail that led to a view of it from a different and distant perspective.  Since we didn’t want to walk the big trail again we decided on the easier one, and frankly didn’t expect much from the view.  But when we got to the end of the trail, we found an overlook that was sublime.  We could see Delicate Arch along the ridge about a mile away, but I didn’t know of the incredible canyon we would find lying between us, nor the vast rock formation that rose in the middle of it, nor the precarious cliff that we now stood upon, feeling like birds looking across immensity.  We were poised on the edge, all right--precarious, vertiginous.  But we loved every moment of it.  (Take away the greenery and the blue sky and there have to be places like this on Mars.) 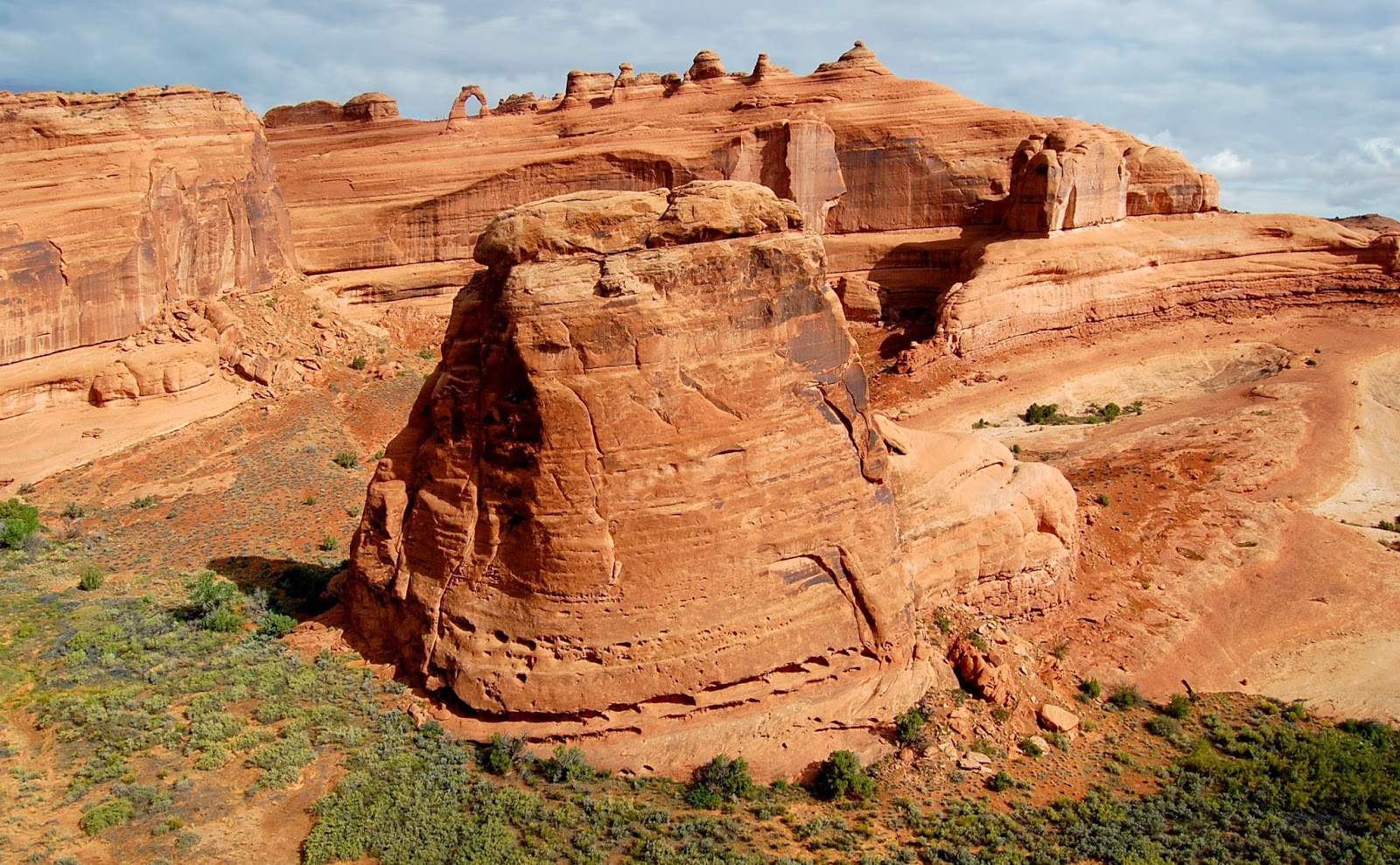 (Don't forget the book signing at Seton Hill on June 27.  See the link for details.  You'll come away with a lot of great books but you'll also get to see more of these "alien landscapes.")

Posted by Albert Wendland at 6:18 PM