Let No Inspiration Be Lost

In the previous blog post, I mentioned finding a strange-looking piece of driftwood on a North Carolina beach one day, which I saved and eventually used as a model for a peculiar spaceborn object in my novel.  Here’s a picture of it, with colored directional lighting for illumination and the background darkened out (using Microsoft Paint and not Photoshop, where I’m sure it would have been a lot easier). 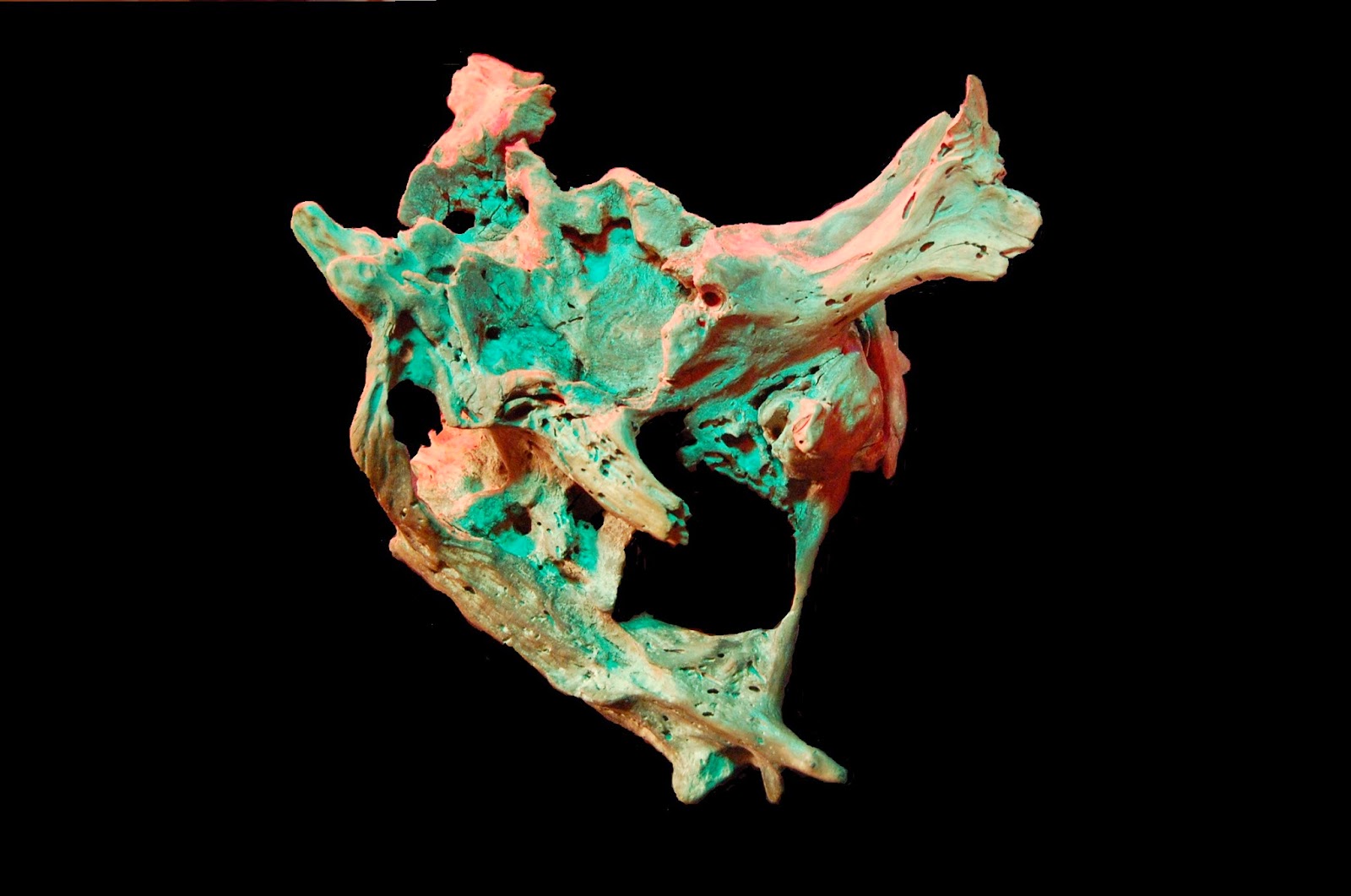 The wood was black as tar when I found it and downright ugly, pock-marked and infested with marine growth and scurrying critters.  I didn’t want to touch it—but I knew I wanted it!  The labyrinthine hollows and curves, the holes that led inward into “caves,” the delicate and bony arches, the vague and disturbing Rorschach associations, the overall sense of massive abuse, and the feel of being ruthlessly pulled inside-out—all this was appealing.  I imagined it as some vast asteroid which could hide a pirate’s fleet, or where you could explore for years and never find all that was hid (a civilization could be buried in there), or a setting for some military skirmish where thousands of hiding places would make tactics and deployment very dangerous.  (It could be 3D scanned and made into a setting for a potential video game:  “War in the Labyrinth!”)  I knew I could use it.
Here’s another angle, with more sinister lighting: 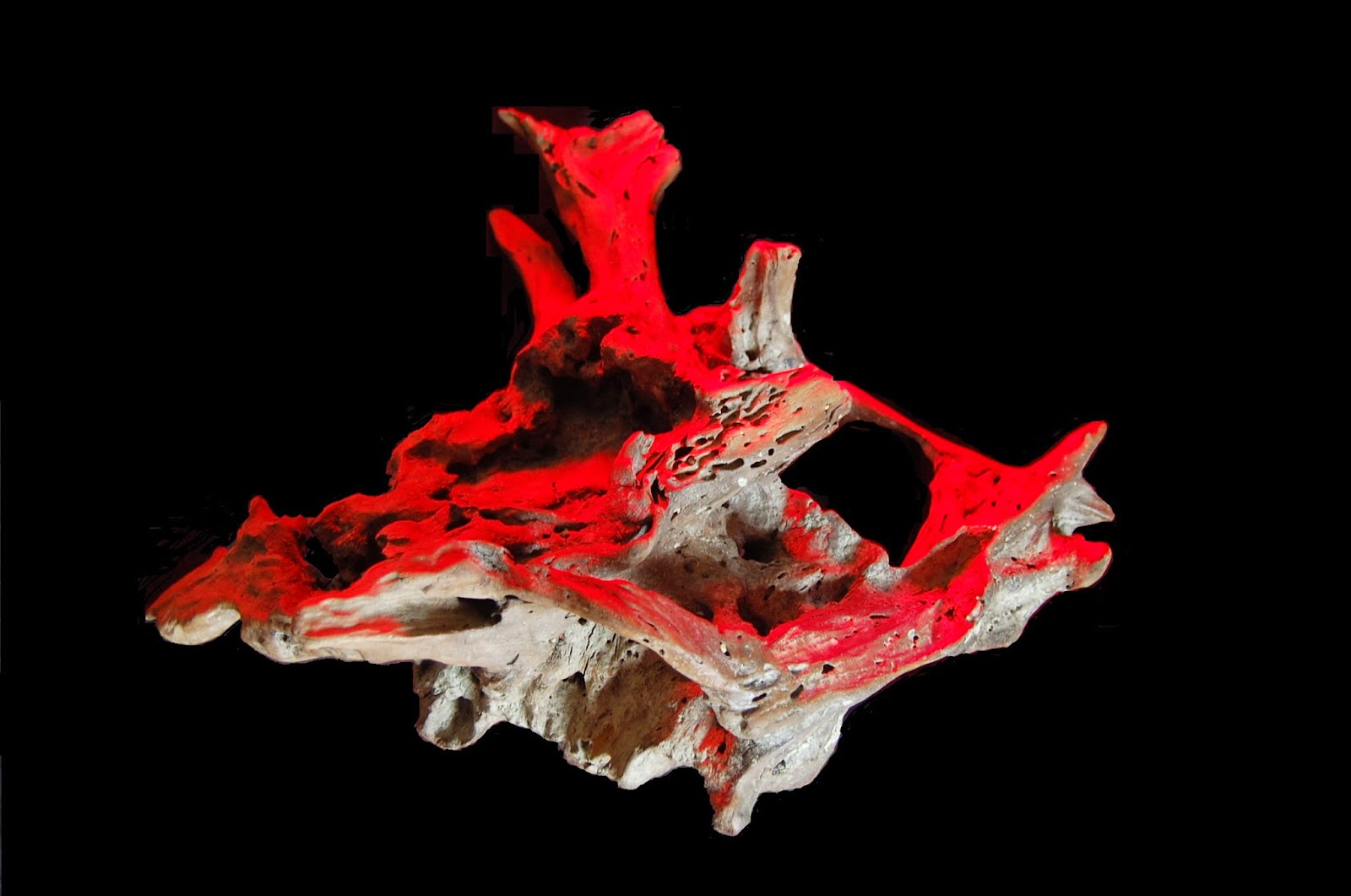 All of these pictures (I took several more) I sent to my cover artist, Bradley Sharp, as reference material, and a stylized modification appears on the cover as the dark object in the center (see posting 14 in this blog, or http://dogstarbooks.blogspot.com/2014/03/cover-man-who-loved-alien-landscapes-by.html,).  Though these visuals, in both the cover and my photos, are ambiguous enough, I knew no painting or photograph could convey the ambiguity one could suggest with just words.  The words would take any attempt at quaint, quick visualization and explode it with references to Kaluza-Klein and Calibi-Yau structures, suggestive names like “fist of thorns,” metaphors like “melting fingers,” and elusive lines like “it reminded you of a visual representation of a mathematical theorem that had gotten out of hand.”
As you can see, I was enjoying myself.
The point of all this?  Never reject the moment of inspiration.  When it’s offered to you, go for it!  That object when I first saw it in the wet sand was drop-dead hideous, like thickened black slime or the snot of a whale, and I didn’t have surgical gloves for handling it.  I was afraid tentacles might shoot out and lock my hands, pulling them into a tooth-lined parrot’s beak—a genre writer’s high-key imagination, you know!  But I was sure it had wondrous possibilities.

As Henry James said, to be a writer you should be a person “on whom nothing is lost.”

So I took it, debating on the wisdom the whole way back to where we stayed, and I left it on the deck to dry in the sun.  It faded somewhat to a drab brown crusted with white, still unattractive but not as grisly as the hardened lava look.  And, except for the spiders that soon emerged and quickly abandoned it, nothing came out to bite me or suck my blood.  And I knew, I was certain, this would be used in a future story.
And it was.  The object—or at least what the object inspired and evolved into—has a star position in The Man Who Loved Alien Landscapes.
I leave you with one last impression, which really brings out the lurking sense of a demon mask.  (But flip it instead and you get a landscape in grim distress.  Ah, the possibilities!) 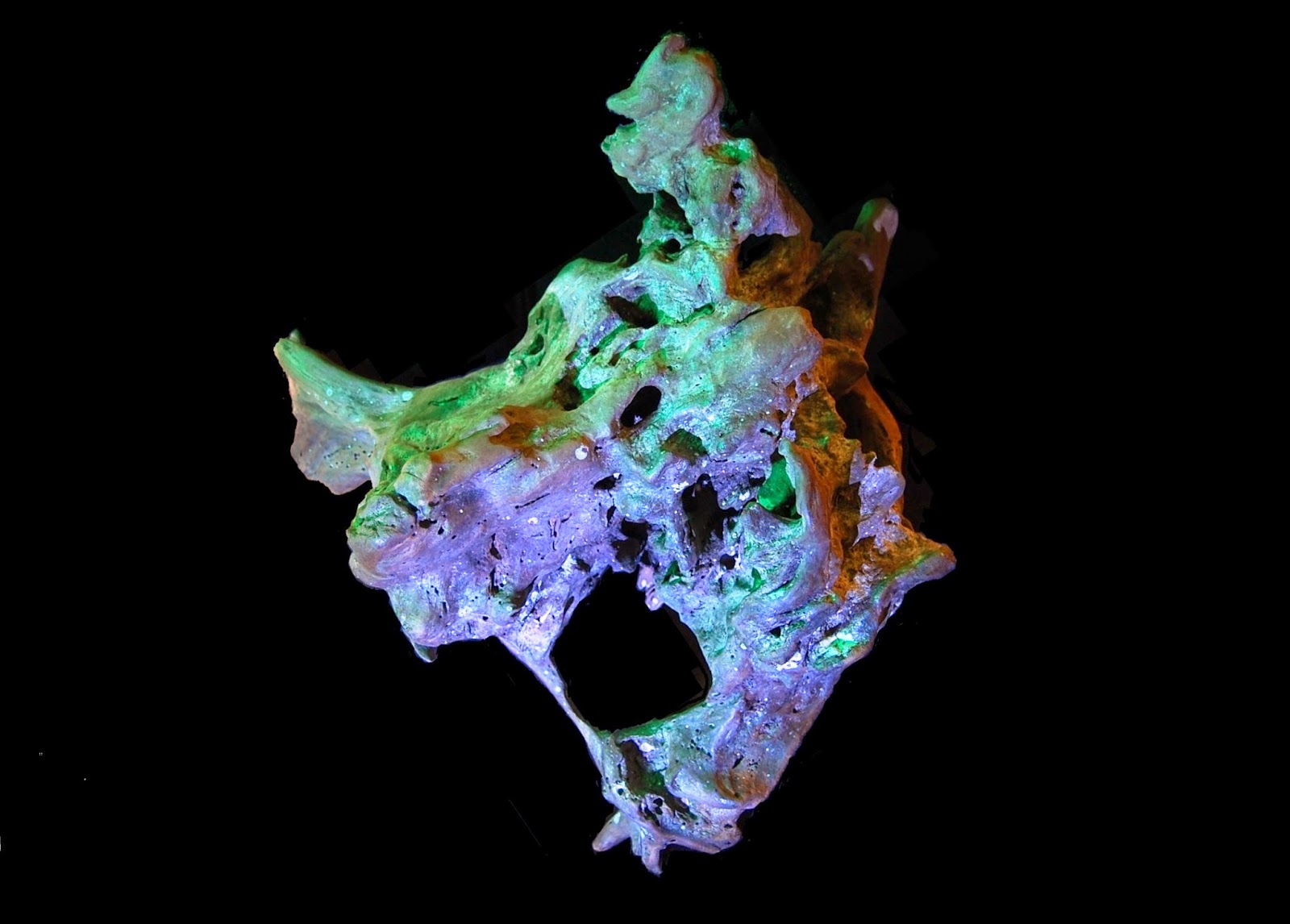 Find that inspiration, folks!
Posted by Albert Wendland at 10:09 AM